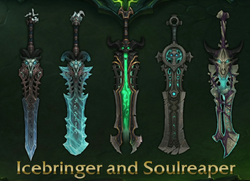 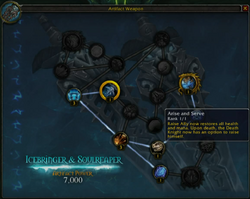 Frost death knights bend the will of Frostmourne’s shattered remnants to their cold-hearted needs. Known as

[Frostreaper], these dual devices of death are waiting to be infused with even greater power. They are twin one-handed runeblades that serve as an artifact weapon, introduced with World of Warcraft: Legion. Frost death knights must venture into Icecrown Citadel to retrieve the shards of Frostmourne to construct the blades.

Crafted by the Burning Legion to corrupt the world of Azeroth, the soul-stealing runeblade Frostmourne was shattered by Ashbringer atop Icecrown Citadel. Countless souls were freed from the broken blade, but others were not so fortunate. Today the shards of Frostmourne can be recrafted and infused with even more power. However, the spirits still trapped within must first be subdued and bent to the wielder's will.[1]

Blades of the Fallen Prince

Before Icebringer and Frostreaper, there was only Frostmourne. The name alone is enough to chill the hearts of the living. Few weapons have shaped as much of modern history as this one. Frostmourne spilled the blood of kings and destroyed nations. The scars it inflicted on the world remain to this day.

Icebringer and Frostreaper will always carry this history with them, but they will not follow in Frostmourne's path. They will make their own future. As one legacy ends, so another begins.

Blades of the Fallen Prince, Part One

The tales of Frostmourne are many, but they all trace back to the Lich King. The Burning Legion molded this spectral entity for one purpose: to spread a plague of undeath across Azeroth. Deep within the trackless wastes of Northrend, the Lich King began this dark task. His influence crept over the world like a shadow and manipulated mortal minds to serve him as agents of undeath.

The Lich King also possessed otherworldly artifacts to achieve his goal. Among them was the demon-forged runeblade Frostmourne. The weapon could consume the souls of its victims, imprisoning their spirits within the blade. It could also remake the living into mindless undead servants. Yet to harness these extraordinary powers, the Lich King required a mortal vessel to wield Frostmourne.

In the young human prince Arthas Menethil, he would find such a vessel.

Lordaeron was the first region crippled by the plague of undeath. The affliction claimed entire families and villages as it tore through the human kingdom. The victims found no peace in death. They rose from the grave as mindless undead creatures called the Scourge.

Prince Arthas Menethil vowed to stop these horrors at any cost. He undertook ever more extreme measures in pursuit of this goal. Eventually, against the wishes of his closest allies, he embarked on a reckless search for the plague's source in Northrend.

There, fate led him to Frostmourne. Though Arthas knew the runeblade was cursed, he believed he could use its powers for good. He was wrong. Upon taking up Frostmourne, Arthas succumbed to the Lich King's iron will. The prince's sanity unraveled, and the runeblade gorged on his soul.

He became the first of the Lich King's death knights.

From the journal of Captain Falric, royal guard to Prince Arthas Menethil:

"There is something unsettling about Frostmourne. Something cold tugs at my heart whenever I am near the weapon. But I cannot deny its power. No one can. Not after this last battle.

"Arthas led us into the stronghold of that unholy creature called Mal'Ganis. We could barely keep up with the prince. He never seemed to tire. Never seemed afraid. With that strange blade in his hand, he ripped through the undead. Even Mal'Ganis stood no chance against the prince.

"A great victory,but I am in no mood to celebrate. Arthas has been acting strange of late. After the battle, he disappeared into the icy wastes. For what reason, I cannot say. I will soon go to find him."

From chapter three of The Fall of Lordaeron and the Scouring of the Eastweald, written by Royal Historian Archesonus:

"In the capital city's throne room, Arthas knelt before his father and liege, King Terenas II. It was to be a reunion of joy, but it ended in tragedy.

"The prince plunged Frostmourne through his father's heart. The blade drained Terenas's soul, as it would do to many others. With one stroke of the cursed weapon, Arthas destroyed more than a king. He destroyed an entire nation. All of Lordaeron soon fell to the dark prince and his Scourge."

As Arthas and the Scourge swept over Lordaeron, panic seized the living. Though many humans gave in to despair, some looked to the holy paladins for salvation. Uther the Lightbringer was the greatest of these righteous warriors. If anyone had the power to stop the fallen prince, it was him.

In the city of Andorhal, the two met in a battle that would decide Lordaeron's fate. Frostmourne clashed with Uther's legendary Hammer of the Lightbringer. Each weapon blow erupted in a shower of warring energies. It was a struggle between Light and darkness, between life and death.

Death prevailed. Frostmourne cleaved through Uther's gilded armor and devoured his virtuous soul. And with that, Arthas extinguished the last ray of hope that remained for Lordaeron's people.

The list of Frostmourne's victims is long. Nearly everyone killed by the runeblade suffered the same dark fate. The weapon feasted on their broken souls and locked them within Frostmourne itself.

Ranger-General Sylvanas Windrunner was an exception. When the Scourge invaded the high elf kingdom of Quel'Thalas, she led a fierce resistance. Her brilliant tactics stymied Arthas and his unholy forces at every turn. She fought with the courage and valor of a true hero.

When at last Sylvanas fell in battle, she did not receive the hero's death she deserved. Arthas punished the ranger-general for her stubborn opposition. He used Frostmourne to rip Sylvanas's soul from her body, and then he transformed her spirit into an incorporeal banshee.

The death of the high elf king Anasterian Sunstrider, as recounted by Magister Hathorel:

"That rabid dog Arthas came to Quel'Thalas for one reason: to steal the power of our glorious Sunwell. We did everything to stop him. Everything. And still Arthas and his foul army marched on.

"It was in those final moments that our great king, Anasterian, appeared. He bore the legendary blade Felo'melorn. Dead and living alike stopped and watched as Anasterian dueled Arthas.

"Old though he was, my king held his own. He pushed Arthas to his limits. But even Felo'melorn was no match for Frostmourne. Arthas cleaved Anasterian's ancient blade in two. Then, with a single ruthless strike, the death knight ran my king through.

"I wanted to fight on, but I knew in my heart that it was all over. Everyone did."

Not even the mighty Sapphiron was safe from Frostmourne's bite. This wise blue dragon was a master of arcane magic and one of the greatest of his kind who had ever lived. For many ages, he and his loyal draconic servants stood guard over a trove of extraordinary relics in Northrend.

It was these relics that drew Arthas's attention to Sapphiron. The death knight and his Scourge minions invaded the dragon's lair to pilfer its treasures. The battle that followed would become one of legend.

Sapphiron and his fellow dragons unleashed the full fury of their arcane might on Arthas, but he would not be denied his prize. The death knight overwhelmed his ancient foes and slew them one by one. Calling on Frostmourne's powers, Arthas then transformed Sapphiron into an undead frost wyrm.

In his new form, Sapphiron would become one of the Scourge's most terrifying weapons.

Few crossed blades with Arthas and lived to tell the tale, but the demon Illidan Stormrage was one of them.

With a mighty army at his back, Illidan stormed across Northrend to destroy the Lich King. He advanced through sleet and snow toward Icecrown Citadel, frozen capital of the Scourge. Upon finally reaching his destination, Illidan found the death knight Arthas and the undead barring his way.

As living and dead waged war upon each other, Illidan and Arthas grappled in single combat.

Armed with the mighty Warglaives of Azzinoth, Illidan assailed the death knight from all sides. The keening of their blades splintered the ice and shook the halls of the Lich King's citadel. Though evenly matched, Arthas gained the upper hand. Frostmourne tore through Illidan's flesh, nearly killing him.

The demon escaped with his life, but his wound would never truly heal. Years later, it would still ache from Frostmourne's icy touch.

With Illidan defeated and his army routed, Arthas took the final step to seal his damnation. He became one with the Lich King, his mind and soul merging with the powerful spectral entity. In that moment, Arthas the death knight was no more. He became the avatar of death itself.

Arthas had bested all of his adversaries, and now his powers had increased by orders of magnitude. It seemed that none could stand against this new Lich King, but there was one who did. His name was Tirion Fordring, and he wielded a holy blade known as the Ashbringer.

At the Second Battle for Light's Hope Chapel, Tirion confronted Arthas and showed the world that he was not invincible. With a mighty blow from the Ashbringer, he forced the Scourge ruler to retreat.

It was not the last time Frostmourne would clash with the Ashbringer. When next the two blades met, only one would remain unbroken.

No king rules forever. Atop Icecrown Citadel, Arthas would learn that lesson.

To destroy the Lich King and his Scourge once and for all, Azeroth's nations launched a massive campaign into Northrend. The bloody war culminated in a siege on Icecrown Citadel itself. Armed with the Ashbringer, Tirion Fordring led some of the world's greatest champions deep into the stronghold.

In the frenzied assault that followed, Tirion once again met Arthas in battle. The Ashbringer crashed against Frostmourne, steel howling like a bitter winter wind. After a single bone-shaking strike, Tirion did what so many other great heroes had failed to do. He shattered Frostmourne. He ended Arthas's reign.

The breaking of Frostmourne unleashed many of the souls trapped within the runeblade. It also freed Arthas from the sword's domination. According to Tirion Fordring, the fallen prince's last words were:

Retrieved from "https://wowwiki.fandom.com/wiki/Blades_of_the_Fallen_Prince?oldid=2831684"
Community content is available under CC-BY-SA unless otherwise noted.