Battleships are massive naval units with great firepower, commonly used by the nation of Kul Tiras, formerly lead by Lord Admiral Daelin Proudmoore. They been in use from the Second War to Proudmoore's recent attack on Durotar. They excel in naval combat and in bombarding targets on shore. Their orcish counterpart is the Juggernaught.

The Alliance relies upon its great Battleships to control the seas. These hulking behemoths possess armor and weaponry far greater than that of any other Alliance vessel. The combination of devastating weaponry and substantial armor that they brandish more than outweigh their somewhat slow speeds in waterborne combat.[1] (W2Man 50)

Human Battleship of the second war

Human Battleship of the second war 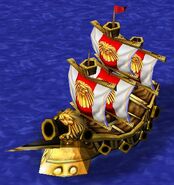 Human Battleship of the third war 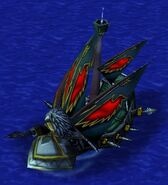 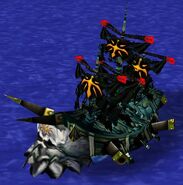 Scourge Battleship
Add a image to this gallery


Retrieved from "https://wowwiki.fandom.com/wiki/Battleship?oldid=2837359"
Community content is available under CC-BY-SA unless otherwise noted.