Shortly before the War against the Lich King

Tactical Argent Dawn victory; formation of the Argent Crusade and the Knights of the Ebon Blade

~1,500 various Scourge underlings, then almost wiped out after Tirion Fordring's arrival
~100 Defenders of the Light

The Battle of Light's Hope Chapel plays out in

[55] The Light of Dawn, the conclusion of the death knight introductory quest chain.

After wiping out the Scarlet Crusade at New Avalon and Havenshire, as well as the armies from Hearthglen and Tirisfal which came to assist the New Avalon forces, the Lich King orders the destruction of the Argent Dawn, the last remaining resistance of any size in the Plaguelands at Light's Hope Chapel.

Highlord Darion Mograine, wielding the [Corrupted Ashbringer], leads Orbaz Bloodbane, Koltira Deathweaver, Thassarian and a force of 10,000 Scourge against 300 Defenders of the Light and the Argent Dawn leadership located at Light's Hope.

The Scourge forces pound hard and take out an entire third of the Argent Dawn defense, but Mograine starts having problems attacking further defenders with the arrival of Tirion Fordring. Fordring's Light-given powers overpower and defeat Mograine, as well as immediately kill the Scourge forces in the immediate area, causing Orbaz Bloodbane to flee. Darion orders the remaining death knight forces to stand down while Fordring berates him for what he has done.

Darion comes back to himself, realizing the depths of his betrayal and attacks the Lich King who swats him away, knocking him out. Fordring, also surprised at the turn of events, comes forward in preparation to attack the Lich King. However, Fordring revealing himself is exactly what the Lich King had planned as he incapacitates Fordring in an attempt to kill him. Lord Maxwell Tyrosus calls in the order to attack and the remaining Defenders of the Light all charge in, followed shortly by the Argent Dawn leadership, all of whom are batted away and stunned in the process.

As the Lich King taunts his nigh-inevitable victory, releasing the spell on Fordring, Darion regains consciousness and throws the Corrupted Ashbringer to Fordring, then collapses again. Fordring realises he is holding a cleansed Ashbringer and charges toward the Lich King. Aware that even he stands little chance against the Ashbringer near the Chapel, the Lich King retreats, promising that the next time he meets Fordring, it will not be on holy ground.

The battle concluded, Fordring walks over to where Darion is lying and brings him back to consciousness. He laments the loss of souls on both sides of the conflict, and calls for a merger of the Argent Dawn and the Order of the Silver Hand. The new Argent Crusade will use their combined force to attack the Lich King, in tandem with the Knights of the Ebon Blade, freed death knights under Darion's leadership.

Death knights at the ready

Argent forces at the ready

The battle is joined!

The Lich King and Alexandros

Fordring and the Lich King

The Light of Dawn
Add a image to this gallery 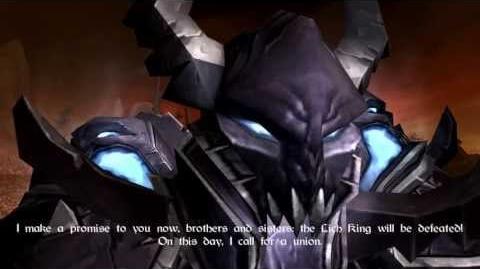 Edit to the right of the section title.
Retrieved from "https://wowwiki.fandom.com/wiki/Battle_of_Light%27s_Hope_Chapel?oldid=2830463"
Community content is available under CC-BY-SA unless otherwise noted.