Ballista, plural ballistae, are weapons used primarily by elves, but may be designed with dwarven and even human engineering.

Based on the same mechanical principles as the crossbow but on a larger scale, ballistae are the siege weapons that hurl stones or metal projectiles toward their targets. They were first built by the night elves, but the forces of both Alliance and the Horde have developed ballistae of their own design. After cranking back lever arms held tight in skeins of leather or sinew, the crew loads a projectile into the ballista's central track. When the trigger is released, the stored tension in the skeins of the ballista propels the projectile downrange at incredible speed.

Ballistae were used during the second war. Ballista launch steel-tipped bolts to impale all in their path. As they require an awesome amount of force to be placed upon their tremendous bowstrings, these machines of war are reinforced with lumber from the precious ironwood trees. The ballista, a product of human design and elven craftsmanship, is a symbol of the unity between all those who have allied themselves against the Horde. The dwarves prove to be another valuable ally, in that they may be employed to design improved missiles which make the ballista the most devastating weapon of the Alliance.[1]

The technology was adapted into the field, crew, siege versions seen after the Second War.

A ballista type used by forces after the third war. A field ballista can be used by small, two-man crew and is usually directed toward less-fortified secondary targets such as mid-field entrenchments. Typically, a field ballista crew travels on two mounts, one pulling the collapsed field ballista like a travois while the other carries a supply of projectiles.[2]

A ballista type used by forces after the third war. Crew ballistae are larger, steel-framed versions of the field ballista. The steel frame is sturdier than wood, and metal housings surrounding the skeins protect them from being damaged by the environment or enemy fire. The four men who wield a crew ballista are divided into two "brutes" who crank the lever arms, the "slot" who loads the bolts into the track, and the "sharp" who aims and triggers the weapon.[3]

A ballista type used by forces after the third war. A terror of the battlefield, the siege ballista can hurl enormous bolts over tremendous distances to penetrate all but the thickest armor. Each arm of a siege ballista is eight feet in length, and the entire weapon must be mounted on a wheeled cart to be portable - and then anchored into place on the battlefield so that it isn't thrown forward when it is fired.[4]

The high elf Ballista helped the high elves fend off Arthas as he tried to attack their capital of Silvermoon in Warcraft III. It is a siege unit that has a long range, built in the high elven barracks. The blood elves did not have ballistae in their Frozen Throne campaign in Warcraft III, although they strangely did have glaive throwers in the undead campaign.

Crafted from the sturdy ashenwood trees, the night elves' ballistae are deadly siege machines built to fling heavy bolts of ironwood at both enemy forces and structures. Ballistae are considered an invaluable asset to the night elf Sentinels due to their mobility and accuracy in tense combat situations.[5]

Night elves largely replaced the weapons with glaive throwers after the Third War.

Ballistae in World of Warcraft

Ballistae can be found in various places in the World of Warcraft, sometimes broken. Some are mobs, such as the Scarlet Ballista.

A human ballista in WoW. 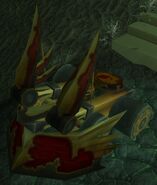 A blood elven ballista in WoW.
Add a image to this gallery

Retrieved from "https://wowwiki.fandom.com/wiki/Ballista?oldid=2734528"
Community content is available under CC-BY-SA unless otherwise noted.