For the naga and once Highborne queen after whom this region was named, see Queen Azshara.

Azshara is located in northeastern Kalimdor, east of Ashenvale, south of Winterspring, and north of Durotar. It is a beautiful coastal area cloaked in eternal autumn. The trees and other flora are tinged in brilliant oranges and reds, and nearer the coast, great cliffs and sandy beaches line the ocean. The region's inhabitants can make life hard for the nature lover, however. Enraged ghosts, vicious satyr, stalking naga and ferocious wildlife can quickly put an end to those who venture too far from the road.

A shattered stretch of coastline on Kalimdor's northeast, Azshara was once the greatest night elf metropolis. The city fell millennia ago in the War of the Ancients, but a few ragged buildings perch on the cliffs overlooking similar ruins among the coral.[1] Much of the city of Azshara fell into the ocean.[2] The Horde had established a small outpost, Grim Ulang, in the area, but naga were a constant danger.[1] Since then, the Horde have expanded, and the whole of Azshara is now under the Horde banner with the Bilgewater Cartel as its governance.

Before the Great Sundering, this shattered stretch of coast along Kalimdor's northern border was once a part of the night elven capital of Zin-Azshari; then came the demons' expulsion from the world. The land was rent asunder and the sea thundered in, making the region a watery grave and leaving nothing but ruins of the once great city. The night elves who survived named this region — once glorious, now nothing but a shattered relic — Azshara, after their queen who was driven mad by demonic influence. Since that time, this place of rocky islands, jagged cliffs, and coral-choked seas has given birth to many tales.

Some night elves suggest that not all of the demons were banished, still lurking beneath the glittering waters of the Coral Sea and waiting to strike back. Others claim that Queen Azshara was not drowned, but transformed into a hideous aquatic thing who will someday lead her accursed followers to retake the surface world. A few whisper that the Dark Portal that first brought the demons to Azeroth remains and rests under the sea waiting for someone to reopen it. Still others assert that the ancient Sundering awakened something that dwelled in the deepest part of the ocean, something that will eventually burst forth in a tidal wave of destruction. Whatever the truth, night elves agree that the region is cursed.[3]

After the devastating Cataclysm, the Bilgewater Cartel goblins took Azshara and claimed it as their land. There were difficulties from the start, including having to battle the naga and storm giants. The Shattered Strand shows the best evidence of this, now turned into a vast battlefield. On the western end of the zone, the night elves were pushing farther inside, expanding their holdings at Talrendis Point and going so far as to attack Valormok. Ever the protectors of nature, they send scouts close to the new goblin Mountainfoot Strip Mine in an attempt to thwart operations there. Even further inland they appear to have befriended the furbolgs at the new Blackmaw Hold, and even taken over what was formerly known as the Thalassian Base Camp, now called the Darnassian Base Camp. Gnomes have also taken the stretch of beach at the Ruined Reaches.

The Blue dragonflight seems to have vanished from the land, abandoning Lake Mennar. Members of the Black dragonflight have taken hold of some northern reaches, including the Bitter Reaches. They are hunting for remnants of the blue dragons, Deathwing believing that the dragonflight has weakened since the death of Malygos. Unbeknownst to him, however, the blue dragons Kalec and Azuregos conspire against him.

A river separates the primordial wood from what land there is. The terrain beyond the river is little more than a strip of green above fragmented cliffs that rise high over a stretch of ivory beach. The waves of the shallow Coral Sea sweep against this beach, and islands — little more than spires of jagged rock — jut from the water. A twisted expanse of reef creates a labyrinth of coral beneath the ocean surface, making sea travel here virtually impossible.

The night elves consider the place cursed, and most other races find the constant storms unpleasant. There is but a single habitation in Azshara, the orc trading village of Grim Ulang, its residents telling of creatures flitting about the ruins of Zin-Azshari further along the cliffs, and murlocs and naga swimming in the Coral Sea. Bands of undead have appeared along the beach and at the fringes of the Ashenvale Forest. As well, the dark chants of demon cultists have echoed along the cliffs in counterpoint to the thunder of storms. Steady rumors and sightings have led to frequent night elf patrols and an increased martial presence in Grim Ulang.[3]

In honor of their induction into the Horde, the goblins have reshaped the whole of the zone into a giant Horde symbol. Further goblin influence can be seen in the following areas: the main goblin city of Bilgewater Harbor rests upon an island in the middle of the Bay of Storms; the Forlorn Ridge has been demolished into a strip mining operation; there is now a rear entrance to Orgrimmar; and the goblins have also set up a long and winding Rocketway that stretches the length of the zone.

The Cataclysm itself wrought a wave of destruction on the landscape, changing it forever. Many areas were destroyed, succumbing to the rumblings of the earth and slipping beneath the waves, including Rethress Sanctum, Scalebeard's Cave, Shadowsong Shrine, and the Temple of Arkkoran.

There are no instances in this zone, though the micro dungeon Lake Mennar used to be here prior to the Cataclysm. In addition, the battleground Azshara Crater was thought to eventually be implemented, but the most recent changes to Azshara make that unlikely.

Alliance: From Forest Song in Ashenvale, follow the road east into Azshara.

Horde: From Splintertree Post in Ashenvale, travel along the road east into Azshara. The Horde encampment Valormok is against the mountains, north of ruined Haldarr Encampment.

Azshara is home to several characters of note. At the Azshara Tower, Archmage Xylem aids mages and rogues in achieving their full potential. Magus Rimtori's Thalassian expedition ravishes the region in search of Highborne relics. Lord Arkkoroc reigns from his watery temple. Loramus Thalipedes, the demon hunter, watches the horizon from his island refuge. Ogtinc assists experienced hunters and priests, and on another small island far to the east, Duke Hydraxis pits heroes of all calibers against their elemental foes, sending them deep into the very core of the earth in search of retribution. Lastly, the Gadgetsprings provide their services to Engineers by selling the very rare [Deepdive Helmet] schematic, among other things.

Azshara, post-Cataclysm (current)
Add a image to this gallery

Bitter Reaches
Add a image to this gallery

A waterfall cascading down from Hyjal

I wonder what this button does?
Add a image to this gallery

Riding the rocket
Add a image to this gallery 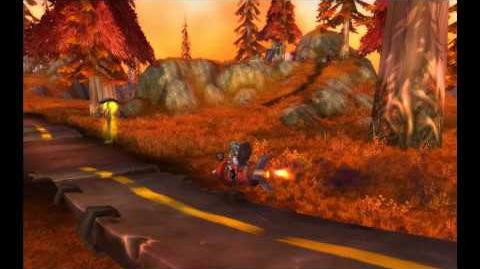 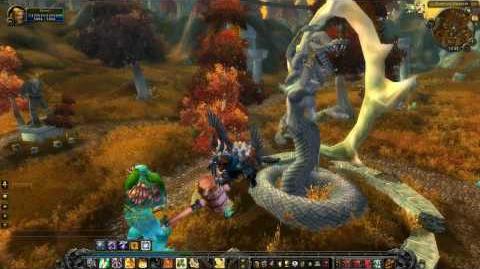 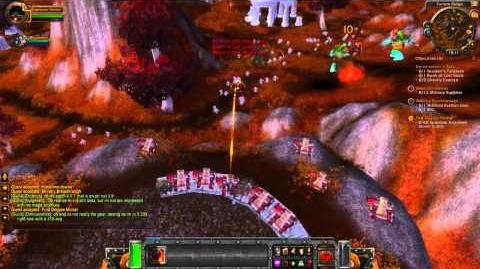 Cataclysm - Azshara Overview
Add a image to this gallery

Retrieved from "https://wowwiki.fandom.com/wiki/Azshara?oldid=2857489"
Community content is available under CC-BY-SA unless otherwise noted.