For the boss fight in Hellfire Citadel, see

Archimonde <The Defiler>.
For information on how to defeat Archimonde at Hyjal Summit, see

Archimonde (pronounced Ark-i-mond) was the right hand of the fallen titan Sargeras. Archimonde was one of the greatest and darkest of the eredar.

His ruthless and cunning personality quickly earned him station and power within the eredar ranks, until finally he was one of the first among them. He is described as one of the lieutenants[4][5] and generals[6] of Sargeras.

Twenty-five thousand years ago, Archimonde was one of the three leaders (the others being Kil'jaeden and Velen) of the eredar homeworld of Argus. The three rulers were contacted by Sargeras and offered immense power in exchange for their loyalty. Archimonde and Kil'jaeden readily accepted the offer, though Velen not only rejected it, but rebelled and fled Argus with his followers to become the Draenei.

Archimonde was appointed as the field commander of the Legion's forces, directing troop movements and overseeing military invasions. Kil'jaeden was charged with more covert operations and recruiting new races and minions into the Legion. Due to their positions, Kil'jaeden and Archimonde each built their own hierarchy of demons that acted as if competitors. Pit lords, doomguards, and eminences served under Archimonde and the dreadlords, while risen terrors[citation needed] and shadow priests followed Kil'jaeden.[7]

Some fifteen thousand years later, when Queen Azshara's reckless magics began to attract the attention of Sargeras, Archimonde, Mannoroth, and Hakkar the Houndmaster led the catastrophic, destructive invasion. With thousands of demonic servants in their wake, they poured through the portal beneath the Well of Eternity, and were let loose upon the ancient land of Kalimdor — razing every structure and spilling the blood of every creature they came across.

However, a Priestess - Tyrande Whisperwind together with a Druid — Malfurion Stormrage and his twin brother — Illidan Stormrage - gathered a small band of night elves, such as the Shadowleaves, and with the help of Cenarius' woodland allies combined with Alexstrasza's mighty dragon flights, managed to beat back the demonic hordes. In the titanic battle, the portal became unstable and collapsed — sundering the world. This event banished Archimonde and his minions back into the burning pits of the Twisting Nether.

Archimonde brooded for ten thousand years in the dark recesses of the Twisting Nether as they planned for a new invasion. His colleague, Kil'jaeden, found the means through Ner'zhul and, eventually, Gul'dan, on the world of Draenor. With Mannoroth's sinister help, the chieftains of the orcish Hordes were corrupted, and a bloodlust came over them that swept them into a tumultuous frenzy that engulfed their world. The orcs were to be the harbinger of the Legion's return, destroying all they beheld so that none could oppose the Legion. However, after the exodus into Azeroth and Draenor's eventual destruction, the Horde was defeated by the humans of former Arathor and their allies, and the orcs failed in their unholy mission.

However, an old tool was found that could once again be put to use. Ner'zhul, the dark shaman of the Shadowmoon Clan, was sent spiraling with his most faithful disciples into the Twisting Nether after attempting to find new worlds to control, and he was found by Kil'jaeden and the Burning Legion. Over time, he was transformed into the Lich King, an ethereal spirit that controlled the undead Scourge, a force so mighty, that it was expected to succeed where the Horde had failed.

Archimonde was to command the Legion's invasion, but he needed the means of getting to Azeroth. Due to his monumental power much more magic was needed to summon him, and he waited until finally he was contacted by Kel'Thuzad the Summoner, who, after stealing the Book of Medivh from Dalaran, began the lengthy summoning process. As he proceeded, the skies were split asunder, and mighty infernals and felhounds were brought to aid the Scourge. Finally, it was completed, and Archimonde was brought into the world of Azeroth.

Invasion in Lordaeron and Kalimdor

Archimonde first placed Tichondrius in charge of the Scourge, saying that there was no longer any need of the Lich King. Unknown to him, the Lich King had been well prepared for this in his greater plan.

Then, Archimonde proceeded to single-handedly destroy the city of Dalaran.

The invasion of Lordaeron continued unabated, the magics of Archimonde summoned hordes of demonic followers, including the diabolical Pit Lord, Mannoroth. Together, they plowed through the nations of Lordaeron, devastating all they beheld. However, Tichondrius soon found that the orcs were missing. The Legion followed them across the sea, where they found not only the orcs but also, the vile night elves who had banished them millennia before.

Archimonde, Mannoroth, and Tichondrius came up with a plot to re-enslave the orcs and use them to destroy the night elves' demigod Cenarius. The plan was partially successful. Mannoroth corrupted Grom Hellscream and the Warsong clan and drove them to slay Cenarius. However, Hellscream later broke free and sacrificed himself to destroy Mannoroth, thus severing the Legion's control over the orcs permanently.

Despite Mannoroth's death, Archimonde had achieved what he wanted - the destruction of Cenarius. He launched the invasion of Kalimdor and openly confronted his night elf enemies. He even met Tyrande, the leader of the Kaldorei people at this point and of the Sentinels, who woke all the ancient druids including Malfurion, and together, they battled the Legion once again.

The Defiler continued the invasion of Kalimdor ruthlessly, battling on many fronts, against the combined forces of the Alliance and Horde, as well as the Sentinels. Under Archimonde's orders, Tichondrius used The Skull of Gul'dan to corrupt the forests of Ashenvale, bringing many of the indigenous creatures into the Legion's fold. However, the Legion suffered a major setback when the rogue night elf Illidan Stormrage stole the Skull and used its powers to kill Tichondrius. Archimonde seemed to have little concern for this loss, and placed his most loyal Dreadlord, Anetheron in joint command of the Scourge with Rage Winterchill, one of the few trustworthy liches.

Archimonde then proceeded with the original objective of the invasion. The demonlord launched a massive attack on the World Tree, Nordrassil. By draining the Tree's energies, not only would his demonic Legion be able to drain the night elves of their source of power and immortality, but Archimonde would gain untold powers rivaling those of Sargeras. But Tyrande and Malfurion had allied with Thrall and Jaina Proudmoore, as well as the Shadowtooth Dark Trolls and the Barkskin Furbolgs.

Archimonde's ascent up Mount Hyjal was agonizingly slow, being forced to destroy every successive base with the help of Azgalor (Mannoroth's successor as leader of the Pit Lords) Rage Winterchill and Anetheron.

The bases, consisting of the humans, orcs and night elves, did slow his ascent — however, his cunning mind and monumental power enabled the Legion to destroy the bases one by one. First he destroyed Jaina Proudmoore's base, then Thrall's base, and finally he reached the night elves' base which he destroyed easily with a wave of his hand. Archimonde smashed the magical gates guarding the World Tree and started climbing the Tree. He grew in size as he climbed, determined to destroy the World Tree and consume its energies. The demonlord paid no attention to the seemingly harmless wisps gathering nearby.

As Archimonde attempted to drain the World Tree, Malfurion raised the Horn of Cenarius and called out to the ancestral guardians. Thousands of wisps rose from the surrounding forests and amassed around Archimonde, detonating in a massive explosion that destroyed the demon warlock and incinerated the forests around the World Tree; nature herself would not allow his defilement to occur. While the World Tree would eventually heal itself in time, Archimonde was gone from Azeroth forever.

Burning Crusade expansion opens the Caverns of Time to players, and the crowning event of the instance is the attempt to ensure that the Battle of Mount Hyjal goes as planned.

Archimonde is not, as was previously said, an un-killable raid boss, but players fight Archimonde's army of undead and demons until the final moments of the battle.

Archimonde and Battle for Mount Hyjal for more information.

This section concerns content exclusive to Warlords of Draenor.In the alternate timeline on Draenor, Archimonde cared little for Kil'jaeden's vendetta against Velen and the draenei, he saw in Draenor an opportunity. Believing that the time for subtlety had passed, Archimonde took command of the Burning Legion's invasion on the planet. He handled things much more forcefully than Kil'jaeden.

As the Alliance and Horde forces, along with their allies, laid siege to Hellfire Citadel, Archimonde was summoned by the Warlock Gul'dan. He was defeated by Khadgar, Yrel, Grommash, and a group of adventurers. As he collapsed, with his dying breath he yelled to Gul'dan that "he made a pact". With the last of his power, Archimonde fired a beam of fel energy at Gul'dan, lifting him into the air and tossing him through the The Black Gate as the portal crumbled.

Archimonde was extremely brutal, and often killed his underlings when they failed him, or just to alleviate his own frustration. While he seemed to be more forgiving of failures of the underlings that he could not replace, his brutal nature was enough of a motivation not to fail him.

After stepping out of the portal in Dalaran

Destroying Dalaran
Spoken in Eredun:
Let this scar signify the first blow against the mortal world
From this seal shall arise the doom of men,
who, in their arrogance, sought to wield our fire as their own.
Blindly they build their kingdoms upon stolen knowledge and conceit.
Now they shall be consumed by the very flame they sought to control.
Let the echoes of doom resound across this wretched world, that all who live may hear them and despair. (before and after destroying Dalaran)

At the Battle for Mount Hyjal

Archimonde's character model in Warlords of Draenor (by DaeroneModels).
Add a image to this gallery 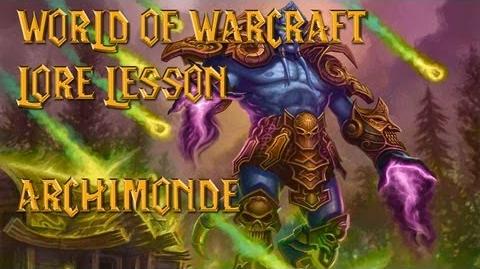 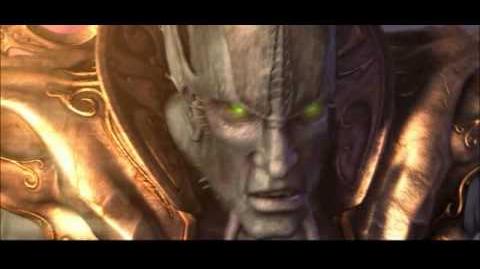 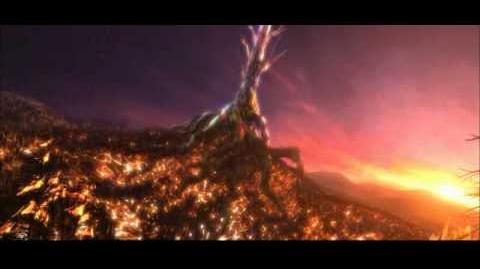 The Story of Archimonde Lore

WoW Insider Know Your Lore: Archimonde the Defiler by Matthew Rossi May 23rd 2012 at 2:00PM

Retrieved from "https://wowwiki.fandom.com/wiki/Archimonde?oldid=2862448"
Community content is available under CC-BY-SA unless otherwise noted.