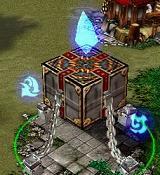 Arcane Vault is an Alliance and blood elf building. Kael'thas forces used them in Frozen Throne Alliance Campaign. It sells items to the hero.

Garithos used the Arcane Vaults in Dalaran as cages to hold Dalaran's experiments. When the blood elves were trying to escape to Outland he had his Elite Guard open the vaults so he could release the experiments on the blood elves to try to prevent them from escaping.

The Arcane Vault is also the name of the store of the Kirin Tor's mightiest of relics in the Violet Citadel.

Retrieved from "https://wowwiki.fandom.com/wiki/Arcane_vault?oldid=1800142"
Community content is available under CC-BY-SA unless otherwise noted.