The arakkoa are an ancient race of bird-like humanoids native to Draenor. They have brightly feathered bodies in a veritable rainbow of colors, hooked beaks, clawed hands, taloned feet, and an erectile crest of feathers on their heads. They wear ragged cloaks about their bodies. Arakkoa appear to also have "sage" (with ornate shoulder and head ornaments) and "warrior" (with a metal helm and mail epaulets) classes. Hazzik mentions they have a caste system.

They have great magical power over the arcane, and are also as "smart as any gnome you ever met", according to Gremni Longbeard in the Hellfire Peninsula. Most are aggressive to both Alliance and Horde, although there are friendly members of the arakkoa to be found.

Arakkoa breed a species of owl called "Kaliri", which have valuable feathers. They also use several types of ravens and owls as guards.

There is evidence of the arakkoa existing for many years before known life in Draenor, the proof being ancient, long forgotten relics left behind by the Apexis long ago.

Most non-arakkoa only know the stories of a hero named Terokk, told by exiles to the adventurers who travel from the world of Azeroth. Terokk is said to have built the city of Skettis with his own claws, and ruled as one of its most powerful kings for centuries before he disappeared without a trace, leaving behind his relics: his spear, his mask and his writings. During his reign, members of the lowest caste of the arakkoa people were sacrificed by his talonpriests to the dark powers they worshipped. Even today, his minions work in his name to commit evils throughout Terokkar Forest. At Veil Shienor and Veil Reskk, the Eyes of Skettis allow Terokk to spy on those areas. At Veil Skith, the arakkoa use the Darkstone of Terokk as an altar of worship. At Veil Rhaze, Terokk raises the spirits of the dead arakkoa killed in the Auchindoun explosion. At Veil Lithic, his minions corrupt the avians into his service. At Veil Shalas, the closest colony to Skettis, the arakkoa sages conduct wars against the Light. When Terokk disappeared, the talonpriests began actively seeking to return him to their world.

The arakkoa continued a nomadic existence on Draenor for thousands of years, though they suffered terribly during the Horde's first wars across Draenor. The resulting grudge against the orc race encouraged an arakkoa, Grizzik, to serve as a tracker and guide for Danath Trollbane's forces during the Alliance's expedition to Draenor. This arakkoa, seemingly alone, led Trollbane's soldiers to Auchindoun, and aided in the battle.

Recently, however, some have broken away from Skettis - some to free themselves from Terokk's evil, and others deluded by power. The Skettis Exiles, taken in by the naaru A'dal, reside in the Lower City of Shattrath, where they battle against Terokk's forces. The Sethekk are also breakaways from Skettis, but for a different reason. When Auchindoun exploded, an arakkoa named Ikiss believed that this was the second coming of the mysterious master of the arakkoa, and with a group of followers set out for Auchindoun - where they set up in what became known as the Sethekk Halls. Ikiss believes himself Terokk reborn, and believes he and his followers are the true followers of their master and true leaders of the arakkoa.

But deep inside Skettis, the arakkoa continue their battles against all who oppose them. The Sha'tari Skyguard, a group of Sha'tari flyers, have a base at Blackwind Landing, just outside of the Blackwind Valley where Skettis is located. On an island in the middle of Blackwind Lake, Terokk awaits the proper alignment of the stars to herald his return... 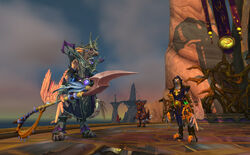 The winged arakkoa are the proud descendants of the once-grand Apexis civilization, a glorious empire of the sun that ruled vast territories alongside the ogre empire centuries ago. While many of the great works of their forebears remain a mystery, the arrakoa of this era – proud, hateful, and defiant – have mastered their own distinct magical arts to channel and control the power of Draenor’s sun. Although they’ve been reduced to a shade of their former power and driven high to the peaks of Arak, the Arakkoa still look down on the ground-dwellers below. Approach winged arakkoa with caution, as they are known to attack ground-dwellers on-sight. 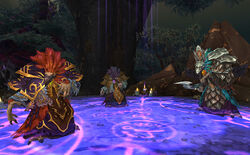 Discipline is harsh for any arakkoa who conflicts with the sages ruling the capital of Skyreach. Those found guilty of breaking the law, dabbling in shadow magic, or worshipping gods other than Rukhmar are hurled from the spires and into the cursed pools of Sethekk Hollow, where their wings shrivel and their bodies contort. No longer able to fly, and forever cut off from their sun god, these outcasts have formed their own communities in the shadows of the spires, particularly in the refuge city of Skettis. The outcasts are a tight-knit group and deeply distrustful, but they share common enemies with adventurers from Azeroth, and it may be possible to forge a relationship with them if one knows who to speak with.

Their capital is the hidden city of Skettis, located in the southeastern corner of Terokkar Forest. They have established various colonies across Terokkar Forest, known as veils: Veil Shienor and Veil Reskk in the north of Terokkar near the border with Hellfire Peninsula, and several along the Bone Wastes - Veil Skith, where the Darkstone of Terokk is located, Veil Rhaze, destroyed by the Auchindoun disaster, Veil Lithic, where the arakkoa corrupt avians into Terokk's service, and Veil Shalas, their greatest colony at the base of Skettis itself, where Terokk's sages wage war against the Light.

They also have established presences at Veil Ruuan, Veil Lashh, Veil Vekh and Grishnath in Blade's Edge Mountains and the Den of Haal'esh in Hellfire Peninsula. There are also two areas where arakkoa appear to have settled in Shadowmoon Valley, but all that remain of their settlements are ruins...and the ghosts of the inhabitants.

Most arakkoa worship the god Rukhmar, and relatedly Terokk. The Sethekk worship Talon King Ikiss (who thinks himself Terokk returned) in the stead of Rukhmar. However, the small tribe of Skettis exiles worship the Light.

Players can use a trinket obtained off of Terokk, called Time-Lost Figurine, to turn their player character into an arakkoa for five minutes. While in this form, going into combat does not change the player back, making this a fun and near must-have for many players. The difficulty, length, and rareness of obtaining the item, however, make it so players with it are scarce.

There are several possible inspirations for their design:

Retrieved from "https://wowwiki.fandom.com/wiki/Arakkoa?oldid=2837272"
Community content is available under CC-BY-SA unless otherwise noted.