This article is about the character biography of Anub'arak. For information on how to defeat Anub'arak in Azjol-Nerub, see

Anub'arak. For information on how to defeat Anub'arak in the Crusaders' Coliseum, see

Leader of the Scourge nerubians, Majordomo to the Lich King, former and the last king of Azjol-Nerub

The Brood Pit, Azjol-Nerub or The Icy Depths, Crusaders' Coliseum

Anub'arak is the former king of the nerubian kingdom of Azjol-Nerub. He was among the nerubians slaughtered in the War of the Spider and later raised by Ner'zhul the Lich King as undead to do his bidding.

The former king of Azjol-Nerub, Anub'arak was among the nerubians slaughtered in the War of the Spider.[1] One of his most loyal commanders was Anub'Rekhan.[2] Ner'zhul the Lich King raised the high lords of the Spider Kingdom as undead to do his bidding, Anub'arak among them.[1]

Now as a malicious crypt lord, he is forced to use his powers to purge the snow swept landscape of any remaining resistance to the reign of the Lich King. Despite the pleas from his former subjects, he has been ordered to massacre many nerubians who tried to oppose the undead.

The Road to Damnation

The crypt lord's travels with the soon-to-be-damned mage Kel'Thuzad through Azjol-Nerub and the necropolis Naxxramas are recounted in the short story "Road to Damnation". In this story the Crypt Lord is called a majordomo by Kel'Thuzad.[1]

The Race to Icecrown

Anub'arak was sent south to meet Arthas Menethil when he arrived in Northrend. Anub'arak saved the dark prince from an attack by blood elves, before he introduced himself and told Arthas of Ner'zhul's plans. Anub'arak helped Arthas to establish a base, and then masterminded the attack on the blue dragon Sapphiron. Anub'arak told Arthas that it would take far too long to fight their way through Kael'thas and Vashj's expansive forces, and formulated a plan to go through the underground ruins of Azjol-Nerub to reach Icecrown, but warned that it would be a perilous journey.[3]

Anub'arak led Arthas into the ruined Spider Kingdom, negating many perilous traps along the way, but all the while, he fought many of his former subjects, the living nerubians, who called him the traitor king for serving the Lich King, who had destroyed Azjol-Nerub.[3]

As they entered the kingdom, they encountered survivors of Muradin's expedition, now led by Baelgun, who reported that an ancient evil had been released beneath the kingdom, and that they would not allow any to open the Inner Kingdom's doors. Anub'arak and Arthas defeated the troublesome dwarves and broke into the Inner Kingdom.[4] Soon, they came upon the evil the dwarves had spoken of - the Faceless Ones - strange, malformed creatures who had been imprisoned beneath the earth in ages long forgotten. They even faced off with a Forgotten One, a creature of great power and resilience.[5]

Upon entering the Upper Kingdom, an earthquake separated Anub'arak from Arthas, and Anub'arak and his minions dug fervently through the rubble to get to Arthas before he killed himself in one of the many booby traps laden throughout the halls of Azjol-Nerub's Inner Kingdom.[6] Impressed at Arthas' resilience, when he found him, Anub'arak quickly ushered him out of Azjol-Nerub and to the surface, where they were immediately engaged with Illidan Stormrage and his servants in a battle for the Frozen Throne. [7]

Anub'arak was quick to the battle, defending Arthas as he magically activated the four obelisks surrounding Icecrown's pinnacle. Finally, all four were active, and Anub'arak stood by as Arthas climbed the stairs to his destiny.[7]

In World of Warcraft: Wrath of the Lich King

In World of Warcraft: Wrath of the Lich King, the in-game Azjol-Nerub is comprised of two 5-man dungeons: Azjol-Nerub and Ahn'kahet, levels 72 - 75. Anub'arak is the final boss of the first dungeon. His color is mostly yellowish green and has purple details on the wings.

Anub'arak made his home in the once proud underland of Azjol-Nerub. Since his betrayal, he has twisted and perverted his former homeland into the wretched squalor it is today. He ruled over an army of undead nerubians who, like their leader, have pledged themselves to serving the Lich King.[8]

Statements of a bigger role

Statements said before release hint that he was going to have a bigger role:

This may have referred to the cut Azjol-Nerub zone, but he has re-appeared in the Trial of the Crusader.

Anub'arak takes the role of a disruptive tank, using previous abilities from Warcraft 3. He will summon a temporary beetle with every spellcast. His spells are impale, sending a line of stunning spikes, burrow charging underground and stunning upon eruption, and forming a temporary shield on himself. His heroic abilities give him a choice of his classic locust swarm, or disabling an opposing hero in web.

It would appear that Anub'arak is yet another unwilling slave to the Lich King.

In Road to Damnation, when Kel'Thuzad remarked that Anub'arak had agreed to give himself to the Scourge in exchange for immortality, he answered: "'Agreed' implies choice." After that, Kel'Thuzad realizes that the Lich King can compel obedience from the undead.[12]

This is also hinted at in Arthas: Rise of the Lich King, where Arthas detects the vaguest stirring of resentment in Anub'arak's voice. Arthas speculated that Anub'arak served only because he had to, and would turn on the Lich King if he was able to do so.[13]

In Azjol-Nerub, his quote upon death is, "Ahhh... RAAAAAGH! Never thought... I would be free of him...", confirming the previous statements.

Anub'arak was raised again following his defeat at Azjol-Nerub by the Lich King to kill the champions of the Crusaders' Coliseum. He appeared grateful to serve his master once again, though this may have been forced obedience. 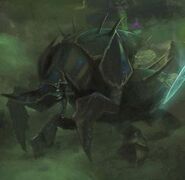 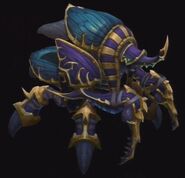 Anub'arak (Default) in Heroes of the Storm 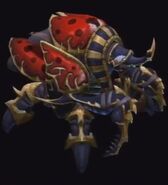 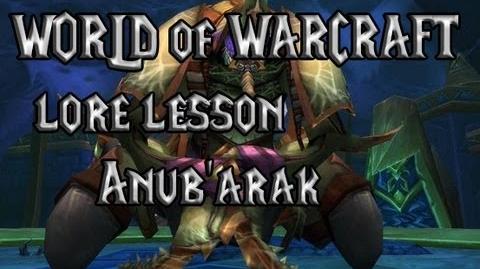 Retrieved from "https://wowwiki.fandom.com/wiki/Anub%27arak?oldid=2856895"
Community content is available under CC-BY-SA unless otherwise noted.