Envoy of Archimonde;[1] Second-in-command of the dreadlords[2]

For information on how to defeat Anetheron in World of Warcraft, see Anetheron (tactics).

A cunning and powerful dreadlord, Anetheron was second only to Tichondrius himself[1] (he later took the place of Tichondrius for a brief period[2]) in the ranks of the nathrezim.

Anetheron waited in the Twisting Nether, acting as emissary of Archimonde to Tichondrius. He was one of the dreadlords assigned to watch over the Lich King, and grew agitated when they began to suspect the Lich King of treachery and possibly becoming a threat to the Burning Legion. But Tichondrius was confident that, despite his obvious ulterior motives, the Lich King was still providing the tools they needed to make way for the invasion. In a meeting in the Twisting Nether, Tichondrius assured Anetheron that everything was still well in his control.[1]

When Archimonde came to the world, Anetheron went with him as a personal guardsman. Anetheron showed his tenacity when he led the Scourge against the Great Alliance consisting of the Sentinels, Alliance, and Horde in the final, climactic Battle of Mount Hyjal. He invaded the Great Alliance's base several times during the battle, calling infernals to serve him, with the objective of defeating the resistance so that Archimonde could ascend to crush the World Tree. However, Anetheron was killed during the battle.[2]

After his death, it is presumed that Mephistroth acts as the new leader of the nathrezim.

Anetheron as seen in Warcraft III. 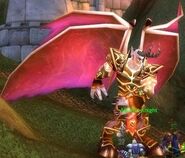 Anetheron in World of Warcraft.
Add a image to this gallery

During the time of World of Warcraft: The Burning Crusade, five years after the death of Anetheron, dark agents infiltrated the timeways and tried to alter the course of the history. They tried to sabotage the Battle of Mount Hyjal and the bronze dragonflight sent adventurers to prevent it.[4] This time, however, Anetheron didn't fight throughout the entire battle, but he was defeated by Jaina Proudmoore, adventurers and troops of the Third War in the human base.[3]

Retrieved from "https://wowwiki.fandom.com/wiki/Anetheron?oldid=2814630"
Community content is available under CC-BY-SA unless otherwise noted.