Were you looking for the digital comic,

Anduin: Son of the Wolf?

King Anduin Llane Wrynn[2] is the current king of Stormwind and son of legendary human hero Varian Wrynn. Conquering doubts and insults laid against him in his youth, Anduin has become a symbol of Stormwind in the style of his father. Inspired by the ideals of the Orc Thrall and his father's campaigns throughout Azeroth, as well as the immense suffering inflicted by the campaign of Deathwing and the philosophy of Pandaria due to his prolonged stay there as a part of the Alliance-Horde war, Anduin has strongly pursued an agenda of peace. The constant conflict that ravaged his homeland in his youth and continues throughout the world continues to defy him, however, and he has been forced to temper his will in battle much like his father before him.

He is named after two venerated figures of Stormwind history: the legendary Anduin Lothar[3] and his grandfather, King Llane.

The son of King Varian Wrynn, ten-year-old Anduin was given the crown to maintain order when Varian disappeared en route to a diplomatic conference at Theramore Isle; however, real power resided in the hands of Highlord Bolvar Fordragon, the Regent of Stormwind, and Lady Katrana Prestor, the Royal Advisor. King Varian's disappearance was a closely-kept secret, and his sudden "return" (later proven to be an impostor) was treated with skepticism by both Anduin himself and other leaders, such as King Magni of Ironforge. He was also captured by Onyxia because he was seen as a threat to her plan to overthrow Varian.[4] He was freed by Valeera Sanguinar and Broll Bearmantle with an army of Stormwind Knights including his father, Varian Wrynn. They slew Onyxia, and Anduin's father regained his former self[5] Valeera Sanguinar is also known to have taught Anduin his excellent dagger skills. She is also known as a bodyguard to him.[6]

From the World of Warcraft manual

This section concerns content exclusive to World of Warcraft."King Anduin is as wise a ruler as any ten-year-old has a right to be. Recently his father, King Varian Wrynn, went missing under suspicious circumstances while en route to a diplomatic summit at Theramore Isle. At the behest of the royal councilor, Lady Prestor, young Anduin was given the crown so that order could be preserved within the kingdom of Stormwind. Though few citizens are aware that their true king has been missing for so long, Anduin does the best he can to allay their fears. It is widely held that the boy will grow to become a shrewd leader one day."[7][8]

Anduin currently stands at the side of his father, who has returned from his long absence. Anduin now has the title <His Highness Prince Anduin of Stormwind>.

In The Shattering: Prelude to Cataclysm

This section concerns content exclusive to the Warcraft novels or short stories.The Shattering: Prelude to Cataclysm


During the novel it is confirmed that, despite his best efforts and those of his Dwarven mentors, Anduin simply does not take very well to the arts of combat. However, he is an excellent archer and knife-thrower due to his steady hands. In fact, his steady hands have found much use, as he excels at medical and the healing arts. He was called upon several times during the shattering to tend the wounded and bring comfort to the distraught. The Holy Light responds well to him, and he feels such a natural affinity to it that both King Magni and High Priest Rohan suggested Anduin may have a more fitting calling as a Priest. Rohan became his new mentor, at least for a time. Anduin went on to impress even members of the Horde with his levelheadedness and genuine concern for the well-being of all peoples, a stark contrast to the attitude of his father.

It is suggested that Anduin will not follow his father's path and become a warrior of Stormwind. Rather, he feels a connection to the light and may become a priest. This decision is encouraged by his friend and 'uncle', King Magni, when he is given the mace Fearbreaker as a gift.

This section concerns content exclusive to Mists of Pandaria.As part of the escalating war between the

Horde that extended to the continent of Pandaria, Anduin was captured and held prisoner at Grookin Hill, east edge of the Jade Forest.[9]

Anduin refused his father's order to return to Stormwind, believing strongly that the Alliance's future was tied to that of Pandaria. After landing, paths were set into motion that helped fulfill Lorewalker Cho's vision of the future, chief among them the fall of the Serpent's Heart. Anduin vowed to remain in Pandaria until he had helped set things right.

He worked with the night elf Sentinels to understand the mysteries of the pools within the Vale of Eternal Blossoms. He was also instrumental in the Alliance's dealings with various factions. He secured the trust of the August Celestials to open the gates to the Vale, focusing on a mission of peace and helping the refugees of Kun-Lai Summit find a place of safe haven.

Anduin can be found in various zones as both a quest giver and receiver, ultimately finding his way to the Shrine of Seven Stars

Anduin was badly injured after Garrosh shattered the Divine Bell in Kun-Lai Summit, crushing the young Prince under the debris. Afterward, he spent considerable time at the Tavern in the Mists, recovering from his injuries. During his stay at the tavern, Anduin passed his time by playing a pandaren board game with Wrathion, learning much from him about the history of Pandaria, and the necessity of the Horde and Alliance joining together to repel a major assault on Azeroth, predicted to occur sometime in the near future.

Heir to the throne of Stormwind, Anduin is wise beyond his years. Time and again, he has used diplomacy to end conflict, inspiring even his warrior father to lay down arms in pursuit of peace. But diplomacy has its limits, and some villains can't be reasoned with. As the Burning Legion threatens to annihilate Azeroth, Anduin will learn the true cost of peace... and whether he's willing to pay it.

Upon the death of Varian upon the Broken Shore, Anduin assumes the role of King of Stormwind and leader of the Alliance.

Approached by Alonsus Faol and Calia Menethil, Anduin learns that there are a small number of Forsaken that wish to reunite with their still-living loved ones. He realizes such a meeting could improve relations between the factions if all goes well, but both Turalyon and Genn Greymane vehemently disapprove. The two eventually come around to his way of thinking, however, especially when Turalyon is forced to recognize Alonsus as something other than a shambling, mindless monstrosity.

The meeting takes place in Arathi Highlands, and Anduin remains with his assembled troops and Turalyon to watch. While the bulk of the meeting goes well, Calia inadvertently reveals her identity when attempting to assist those Forsaken that wish to defect from the Horde, much to the concern of Anduin and the fury of Sylvanas Windrunner. He watches helplessly as Sylvanas orders her archers to kill her own people, entering the field himself when he notices that Calia has become a target. He attempts to get to her in time, but Sylvanas kills her with an arrow to the back.

Anduin retrieves her body, risking a direct attack by Sylvanas, but she allows him to leave. He and Alonsus then take Calia back to Netherlight Temple. It is there he is asked, along with Alonsus, to use their power in conjunction with the naaru Saa'ra, to bring Calia back to "life".

This section concerns content exclusive to Battle for Azeroth.Anduin now holds little hope that the Horde, under the leadership of Sylvanas, will ever desire peace, so when azerite is discovered in Silithus, he comes gravely concerned. With the Horde the first to discover the element, he orders Mathias Shaw to send his spies into Orgrimmar to discover their plans.

When it appears the Horde are sending their troops to Silithus in an attempt to safeguard the azerite, Anduin dispatches the Alliance fleet as well, including night elven ships from Teldrassil. The spies have also reported a falling out between Varok Saurfang and Nathanos Blightcaller, something he easily believes and hopes to use to the Alliance's advantage. He is just as surprised as the other leaders of the Alliance when the marching Horde forces turn north to Ashenvale instead.

There is little he can do to thwart the surprise attack, so instead Anduin focuses on recalling the fleet to send it in defense of Teldrassil. In the meantime, he assists Tyrande Whisperwind with the evacuation of Teldrassil and Darnassus, making room in Stormwind for their night elven allies. Though the night elven fleet arrives back in their own territory, they are largely routed by the Horde and Teldrassil is set ablaze.

With Sylvanas's depravity absolutely certain in his mind, Anduin feels there is no alternative but to storm the Undercity and imprison Sylvanas for the genocide. He, Genn Greymane, and his troops begin the offensive, but are routed by the blight that Sylvanas launches at them. It is only through the intervention of Jaina that they are able to proceed, driving through the gates and into the heart of the upper city. Alleria Windrunner arrives with Gelbin Mekkatorque, backing up the troops, and then she and Jaina join Anduin and Genn as they confront Sylvanas in the throne room. Sylvanas manages to escape, unleashing more blight throughout the city, and it is only through the magic of Jaina that they escape.

This article or section includes speculation, observations or opinions possibly supported by lore or by Blizzard officials.*
Lore-wise, Anduin Wrynn was ten when the original World of Warcraft game was released.[citation needed] However, given the time change taken into account by the release of

Wrath of the Lich King, he would be 12 years of age.

[Anduin Wrynn's Gold Coin]​​​ fished from the Dalaran fountain has the flavor text "I wish I would grow up, it feels like I've been 10 for years."

Stormrage, whose action takes place sometimes after the fall of the Lich King, claims that he is not quite thirteen.[citation needed]

The Cataclysm takes place three years after the War against the Lich King. If correct, Anduin would be around 15 during

In the novel, War Crimes, it is stated that Anduin is 15.[10][citation needed]

He is around 18 years old in

Battle for Azeroth, he is around 19 years old.[citation needed]

This section's content needs citations, references, or sources.
The son of a King is always titled as a prince. As such, his title was previously:

However, since inheriting the throne following the death of his father, he can now officially be referred to as:
His Majesty, Anduin Wrynn, King of Stormwind

Prince Anduin in a previous build of WotLK. 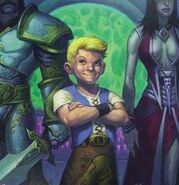 Anduin in the Trading Card Game. 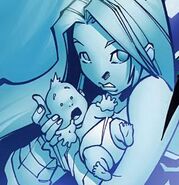 Anduin as a baby in his mother's arms.

Anduin in the comics

Anduin with his bow. 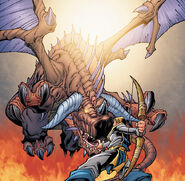 Prince Anduin in Stormwind Keep near his father as seen in World of Warcraft: Cataclysm

Anduin in the future

Anduin in the Battle for Azeroth cinematic

Retrieved from "https://wowwiki.fandom.com/wiki/Anduin_Wrynn?oldid=2853542"
Community content is available under CC-BY-SA unless otherwise noted.