Healer, Druid of the wild, Shaman

Grove of the Ancients (presumed)

The mighty tree has a massive face shaped in its trunk, with wise, deep-set eyes. It moves with gigantic root-like feet, and two great branches end in huge bark-skinned hands.[1]

Ancients are demigod-like trees.[2] They are some of the most important creatures in night-elf society. They resemble sapient trees, but their wisdom and insight are almost unparalleled. Many of them are thousands of years old. They assist their night-elf allies with guidance, education (particularly in the druidic arts), and protection — they are large and powerful, and are protectors of the forest.

They are large enough to carry night-elves, and some are so enormous that a few night-elves make their homes in them.

The wisps act in unison with the night-elves and serve to strengthen the demigod-like trees known as the Ancients.[3]

Most ancients resemble deciduous trees that live in temperate climates, such as oaks and maples. A few evergreen ancients also exist. No reliable reports of tropical ancients have yet surfaced, but the night elves claim that they can exist — and if a colony of night elves moves to the tropics and brings along the appropriate druidic magic, tropical ancients may indeed grace Azeroth's surface. Ancients speak Darnassian, though a few also speak Common. Their voices sound like ancient trees creaking in the wind.

Ancients are traditionally friends of night elves and good-hearted, but the recent Third War makes them suspicious of non-night elves. They give outsiders a chance to prove their good intentions; but if roused to anger ancients are implacable foes.

Some ancients patrol their territories, but most spend their time standing still, virtually indistinguishable from normal trees. An ancient may watch intruders, perhaps moving in secret to dog their path. If the outsiders do nothing to harm the forest or nature's balance, the ancient leaves them alone.

If the outsiders appear to share the same ideals as the ancient (destroying corrupted creatures or protecting trees from other intruders, for example), the ancient reveals itself and lends assistance. If outsiders abuse the land, the ancient rumbles to a fury and attacks with swings of its arms.[4]

Giant, sentient trees that sometimes serve as advisors and protectors of the night elves as NPCs, but also wander the lands as hostile monsters. They lack apparent independent construction of settlements, but are otherwise highly intelligent. They can also root into the ground to become more of a tree. The WoW ancients do not seem to utilize this ability.

Male and female figures alike with hooded faces fought in the War of the Ancients. The little flesh that could be seen was made of oak bark.[5] 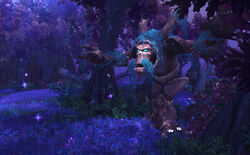 It was only very recently that draenei rangari managed to communicate with these enormous sentient trees, but wildly different ways of life—not to mention a completely different perception of time—have made further interaction difficult.

The ancients get their name from their analogues on Azeroth; they are tied closely to a prehistoric plant lineage that unites much of Draenor’s flora and places them in opposition to the creatures of stone. These enigmatic ancients remain in the same area for hundreds of years and are reluctant to move unless their home is threatened.

Adventurers should be cautious when harvesting the valley’s lumber, as they may find the forest fighting back.

Types or subraces of ancients Edit

Retrieved from "https://wowwiki.fandom.com/wiki/Ancient?oldid=2837265"
Community content is available under CC-BY-SA unless otherwise noted.