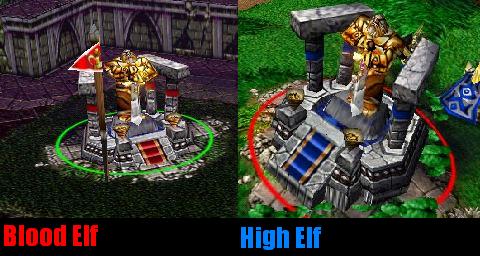 Made by materials provided by Kirin Tor, the Altar of Kings, acts as a harness for the derelict life forces of fallen human champions (including their allies the dwarves, and high elves). It is only at this site, once erected, that heroes may be resurrected to do battle once again (for an offering of gold). The specifics of this building's magical properties are among the most guarded secrets in all human realms.

The Altar of Kings in the high elves' capital Silvermoon were used to try to fend off Arthas as he tried to conquer Quel'Thalas in Warcraft III by reviving Sylvanas Windrunner the high elf ranger hero. The blood elves use a different Altar of Kings that revives a Kael'thas in The Frozen Throne in Curse of the Blood Elves. It cannot be built by the high elf worker probably due to the limited ability of the map editor prior to the Frozen Throne expansion. With the Frozen Throne expansion map editor, it is possible to make additional groups with building orders. The high elves kept one third of the Key of Three Moons to Silvermoon in these altars with four obelisks surrounding it.

Some Altar of Kings were used by the blood elves and Kael'thas in the Curse of the Blood Elves Campaign.

Retrieved from "https://wowwiki.fandom.com/wiki/Altar_of_Kings?oldid=2088012"
Community content is available under CC-BY-SA unless otherwise noted.