Algalon the Observer is a hard mode-only encounter in Ulduar, released in patch 3.1.

Algalon is a constellar[2] sent by the titans after Watcher Loken's death activated a planetary fail-safe protection, indicating possible distress on Azeroth.[3] Algalon's task is to analyze any systemic corruption on the planet. If it's deemed beyond saving, the Titans will "re-originate" the planet to cleanse it of corruption, killing all currently living organisms in the process. After his defeat in Ulduar, he chose to monitor the activities of the mortal races of Azeroth. His outlook on life and the Titans' plans has been called into question, so he seeks to understand what makes Azeroth so different from the countless worlds he has observed before.[4]

Gaining entry to the Celestial Planetarium

Algalon can only be accessed if at least one member of a raid has obtained the [Celestial Planetarium Key] or [Heroic Celestial Planetarium Key]. Players used to have a one-hour window to defeat him per lockout period, starting upon first initiation of the encounter.[5] However, since patch 4.0.3, this timer has been removed allowing a raid to have unlimited attempts at the encounter. Blizzard has sardonically referred to him as "Algalon the Raid Destroyer".

Algalon dual wields and his swing speed is extremely fast, with ~27,000 main hand and ~15,000 offhand swings coming every second or less.

Algalon dual wields and his swing speed is extremely fast, with ~18,000 main hand and ~10,000 offhand swings coming every second or less.

Algalon transforms the arena into space and immediately begins attacking the player with the highest threat. Algalon hits very hard and fast; he casts Quantum Strike on the tank with high frequency, so healers must ensure that the tank remains at full health at all times. All DPS merely attack the boss the best they can. Algalon can be positioned anywhere, as he has no frontal cleave or cone attacks.

After 15 seconds, Algalon begins casting Phase Punch on the current tank every 15 seconds and also summons four Collapsing Stars. Once the tank gets 5 stacks of the Phase Punch debuff, that tank is ported out for 10 seconds as if he stepped into a Black Hole, whereupon the debuff is completely removed. Algalon then switches to the second highest on his threat table. Your off-tank should be ready to taunt, with healers ready to change targets, as the off-tank begins taking substantial damage very quickly. Algalon will be Phase Punching the tanks throughout the fight; tanks must keep switching after.

Assign one or two ranged DPS to kill the Collapsing Stars one at a time. Since they slowly lose health on their own (1% health per second), if left alone, they will all explode at the same time and wipe the raid. Alert the healers so they are ready before a Collapsing Star is killed, as the entire raid takes roughly 16,000 shadow damage regardless of positioning (a tank who is too low on health when a star explodes can die and likely cause a wipe). When a star dies, it leaves behind a Black Hole, which is both a void zone and a portal to another realm. Collapsing Stars keep spawning throughout the fight until Phase 2 and should always be killed.

Every 25 seconds, Algalon casts Cosmic Smash on a random player, including a tank. This appears as a red fissure, which explodes after a few seconds. Everyone—not just the targeted player—should move away from the red fissure, as it causes splash Fire damage, based on player distance with the impact point.

Fifty seconds after the initial pull, Algalon summons three Living Constellations that cast Arcane Barrage on random players and have normal threat tables. It is unnecessary to DPS a Living Constellation. Instead, a single player can aggro these and run behind any available Black Hole, as any Living Constellation that passes through a Black Hole dies instantly, causing that Black Hole to disappear. The player assigned to do this should be careful to run around a Black Hole instead of through it to avoid being portaled. Death Knights are an ideal choice for this, as they can stand behind Black Holes and use Death Grip to pull the Constellations into the hole.

Every 90 seconds from the initial pull, Algalon begins casting an 8-second lethal spell called Big Bang. To avoid getting hit by Big Bang, everyone must enter a Black Hole created by a killed Collapsing Star except for one person. For this reason, all players should be aware of the location of remaining Black Holes after Living Constellations are killed. Players need not enter the same Black Hole as everyone else; all Black Holes lead to the same dark realm. Once inside the Black Hole, players take roughly 1,500 Shadow damage per second and must avoid elite adds called Dark Matter scattered throughout the realm until Algalon finishes casting Big Bang, and automatically portals everyone back to the normal realm.

If everyone enters the Black Holes and Algalon has no player in the normal realm to target, he kills the raid with Ascend to the Heavens, then disappears. For this reason, one player must remain in the normal realm to eat the Big Bang. A player protected with a Holy Priest's Guardian Spirit, a Shadow Priest casting Dispersion, a Fire Mage with 2 ranks in Cauterize, or a tank blowing all cooldowns are all capable of eating the Big Bang. Note: Big Bang ignores immunity effects such as Hand of Protection, Ice Block, and Divine Shield.

Entering a Black Hole also resets all threat of the player. If the currently Phase Punched tank stays outside to eat the Big Bang, the off-tank can taunt to gain all the threat he had upon return to the normal realm, ensuring that the rest of the raid doesn't pull aggro.

This phase continues until Algalon reaches 20%.

Algalon then summons four new Black Holes in a square pattern. Every 30 seconds, four Unleashed Dark Matters will spawn, one from each Black Hole. The off-tank needs to pick these up and tank them to the side for the rest of the fight, and DPS must burn down Algalon before these adds pile up and become too much to handle.

When this phase begins, consider swapping tanks, as the current tank will very likely have the Phase Punch debuff and the off-tank will have a hard time surviving if he has to tank the adds and Algalon together. If you swap once the Black Holes spawn, you'll be given about 45 seconds to defeat Algalon before a forced tank-swap which should be long enough. Players also need to keep alert about Cosmic Smashes as Algalon will still be using this.

Once Algalon reaches 1-2%, he is defeated, all adds and Black Holes despawn.

Main article: Gift of the Observer

Engaged for the first time

The following achievement is given to the first raid group on a realm to defeat Algalon in a 25-man raid: 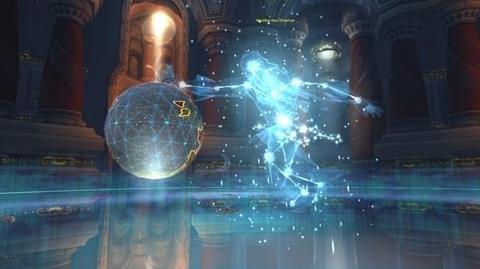 How to Solo Algalon the Observer MoP
Soloing circa 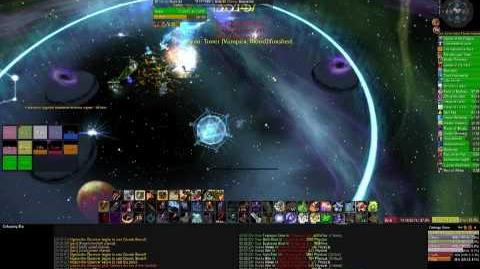 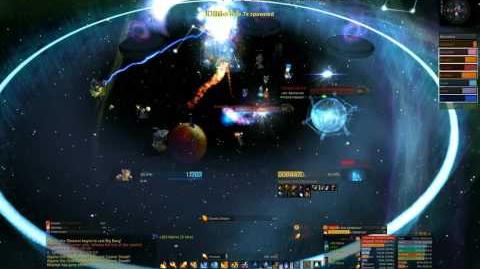 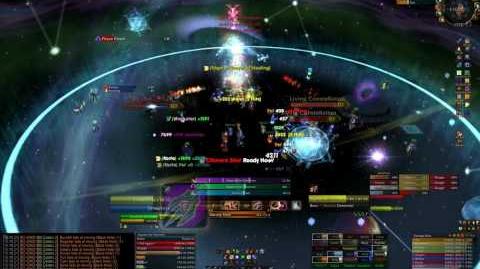 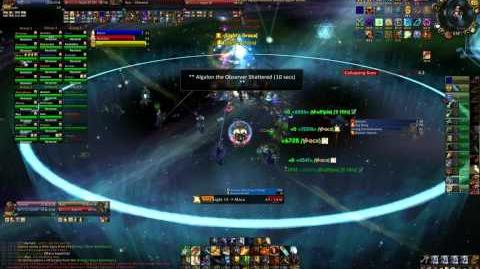 Forlorn Legacy Presents...Algalon The Observer
Add a image to this gallery

This section needs to be cleaned up to a higher standard of quality. Reason: These need to be checked and converted.

This section needs to be cleaned up to a higher standard of quality. Reason: Needs more info about how this is relevant.

All stars at the end of their main-sequence life cycles undergo gravitational collapse, where the core is compressed and heats up. If the density of the core exceeds a critical point, the star will eventually collapse to an almost infinitely dense "black hole" and release vast quantities of electromagnetic radiation in the most well known type of supernova. A star with a core that contains more than 3 solar masses may collapse into a black hole. Normally, passing a black hole's event horizon makes it impossible to escape the black hole's gravitational pull, however players may freely pass between a black hole's event horizon due to gameplay purposes.

WoWraid Preview of Algalon (video, abilities, quests, etc.) to prepare your raid for that 1 hour timer.