For the Akama who appears in the

Warlords of Draenor expansion, see Exarch Akama.
For the portion of his soul bound to Illidan, see Shade of Akama.

When the time is right, the Betrayer will become... the betrayed. (TCG)

Akama is a level 70 Elite Broken draenei located at Warden's Cage in Shadowmoon Valley. He is the leader of both the Ashtongue tribe and the elite of said tribe called Ashtongue Deathsworn, a faction of Broken draenei supposedly in the service of Illidan Stormrage. He was an elder sage of a group of Broken draenei that resided in the wilderness of Outland. Offered a chance at revenge against the orcs who decimated his people by the night elf/demon hybrid Illidan Stormrage, Akama allied himself with Illidan the Betrayer and aided in the overthrow of Magtheridon, only to later find that Illidan was no better than the pit lord. To all outward appearances, Akama remains a loyal servant of Illidan and leads his Ashtongue Deathsworn in his service — but away from his prying eyes, Akama sought to end Illidan's reign.

Allying with Maiev Shadowsong, whom he had been charged with keeping imprisoned, Akama rallied a group of adventurers to enter the Black Temple, leading up to the final battle with Illidan himself — the battle that supposedly ended the Betrayer's life. With Illidan gone, Akama hopes that the Holy Light will fill the dismal halls of the Temple once more...

Akama is a kind but hardened Broken draenei who was once the guardian of the Temple of Karabor. When the Horde descended upon the Temple, Akama took charge of evacuating as many civilians as possible and then went into hiding with the remnants of the draenei. In the short story Unbroken, he fled from the Temple to Shattrath City before going into hiding, where he was the most exposed of the refugees to the fel energies that caused some draenei to mutate. After the cataclysm and the shattering of Draenor, Akama, now an elder sage of the Broken draenei survivors, was forced into the open where he fought a losing battle against the pit lord Magtheridon and his army of demons and fel orcs.

Akama found himself aided by Kael'thas Sunstrider and Lady Vashj, a blood elf and naga who had come from Azeroth to escape the clutches of human captors. Hoping to gain allies in the fight against Magtheridon, Kael'thas and Vashj destroyed the base of the fel orc who had been raiding Akama's makeshift outpost. Akama pledged his loyalty to Illidan and aided them by attacking a larger orcish base, keeping the enemy occupied and away from Kael'thas and Illidan as the two closed the dimensional gateways — which were supplying constant reinforcements to Magtheridon. After that battle, the time had come to lay siege to Magtheridon's Black Citadel itself.

Akama pledged allegiance to Illidan, craving vengeance on the orcs and demons who had corrupted and slaughtered his race, however, since this moment he begun planning his inevitable conflict with Illidan.[3] Using his stealth abilities, Akama and a band of his followers snuck into Black Temple and destroyed the magical energy generators which sustained the defenses of the citadel, and then aided Illidan, Kael, and Vashj in the final attack against Magtheridon himself.

When Kil'jaeden appeared and ordered Illidan to destroy the Frozen Throne, Illidan, Kael, and Vashj went as ordered, while Akama remained in Outland to guard their holdings.

Akama in World of Warcraft

Akama can be found in front of Maiev Shadowsong's cell in Warden's Cage in Shadowmoon Valley. In order to reach him, you must enter into the underground portion of Warden's Cage and look to your right at what appears to be just a pool of water. Swim into and under the pool and you will reach Maiev's cell where Akama is standing guard.

After an introductory quest chain, in which players have to prove that they are not allied with Illidan, they are sent to speak with Akama. He explains that it is best for his people to continue to appear to serve Illidan until certain omens are fulfilled. He then gives a quest to speak with Sage Udalo who is being held prisoner in Arcatraz, a satellite of Tempest Keep. Udalo is dead, but has left a clue behind for the next quest.

On returning from Arcatraz, Akama gives a quest to retrieve the [Heart of Fury], one of the shards of the Ata'mal Crystal, from Ata'mal Terrace in Shadowmoon Valley. When this is completed, Akama sends the party to meet a naaru, A'dal, in Shattrath City.

Shade of Akama, the portion of Akama's soul tied to Illidan's will, is a boss in Black Temple. During the final confrontation with Illidan, Akama himself will assist you in battle, although he cannot be killed. Akama leaves the battle during the first phase and is not seen again for the remainder of the battle; however, Maiev Shadowsong arrives for the final phase and remains until Illidan's death. Akama had freed Maiev from her prison cell and led her into the Temple with the aid of players seeking to obtain the [Medallion of Karabor] that allows entry into the Temple. After Illidan is defeated, Akama swears to fill the halls of the Black Temple with Light once again.[4]

He gives the following quests:

After completing the quest entitled Akama, a small scripted event between Akama and the dreadlord Vagath — one of Illidan's demon lieutenants — occurs. Vagath arrives with two demonic minions and yells out:

In a cell behind Akama, Maiev Shadowsong speaks up.

This section concerns content exclusive to Cataclysm.As of Cataclysm, Akama and Maiev will appear on the loading screen for Outland.

This section concerns content exclusive to Mists of Pandaria.Akama is furious over the Council of the Black Harvest break-in in to the Black Temple. An adventurer then states (if Alliance) that King Wrynn sent him or her there. Akama is asking for help fighting some demons but the adventurer's imp has a better idea: searching for treasures instead of helping Akama.

This section concerns content exclusive to Warlords of Draenor.Akama appears in Shadowmoon Valley, Draenor primarily as Exarch Akama before he became a Broken.

Akama is the narrator of the trailer for the Black Temple patch; this trailer shows his history from a guardian to his current state, and reveals his appearance prior to his mutation. At several points, it reveals events of lore: the orcs' attack on the Temple of Karabor and the draenei journey into hiding in Zangarmarsh; Gul'dan's raising of the volcano that bears his name; Ner'zhul opening his portals, leading to the creation of Outland; the arrival of Magtheridon and, later, of Illidan Stormrage; Akama, Kael'thas Sunstrider, and Lady Vashj aiding Illidan in sealing Magtheridon's portals before the final battle; and finally, Illidan claiming Black Temple.

His speech is transcribed below:

I remember the Temple as it used to be: a place of worship.


I prayed within its chambers and meditated among its gardens. I was happy then; at peace.


I remember, too, the day the orcs came.


That day marked by cries of war and torrents of blood where terrified women and children huddled in darkened corners.


I led many to safety, but many more paid the ultimate price.


That day my beloved sanctuary became the Black Temple.


There the orc warlocks practiced their twisted magic that corrupted the land and nearly destroyed us all.


Even after the Horde's reckless sorcery tore the planet apart, my people were unable to find a lasting sanctuary.

I remember the armies of demons that swept down on us like a plague.


During these dark times, the one called Magtheridon made the Temple his home.


The one they called the Betrayer; the enemy of my enemy.


We helped him seal the portals of Outland and cut off the Legion's reinforcements.


We fought with renewed strength, and together we reclaimed our sacred ground.


I think part of me knew even then, that the Black Temple had only traded one evil master for another.


I prefer to remember the Temple as it used to be; not the abomination it has become.


My soul bears the burden of my misjudgment, but I have been patient; I have been waiting.


And when the time is right, the Betrayer will become... the betrayed. 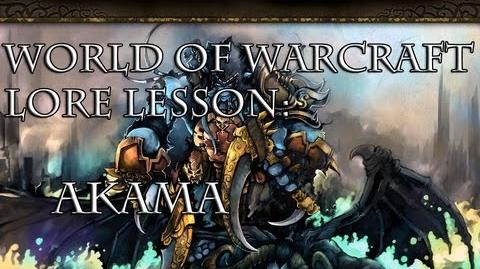 Retrieved from "https://wowwiki.fandom.com/wiki/Akama?oldid=2856288"
Community content is available under CC-BY-SA unless otherwise noted.