Start a Wiki
Aderic's Repose[47.6, 52.4] is a large cemetery that seems to be the main burial grounds for the kingdom of Gilneas. Situated east of Gilneas City across the Northgate River, it consists of a few structures and winding paths that lead almost to the top of the large hill in its center.

A shrine is at the highest spot, marked with a flag of Gilneas. Called Aderic's Tomb, this also becomes the final resting place for Liam Greymane, the son of King Genn Greymane, who died while fighting Sylvanas Windrunner and the Forsaken as they attempted to claim the capital city.

When worgen players first arrive, the area is inundated with spirits of the dead. Due to the panic caused by the Forsaken invasion and destruction wrought by the Cataclysm, the fleeing survivors trampled their way through the cemetery, disturbing the mementos normally left for the dead atop their graves. Players are tasked with finding these to help put the spirits to rest.

The Entrance to Aderic's Repose. 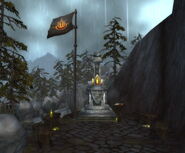 Aderic's Tomb within the Aderic's Repose.
Add a image to this gallery

Retrieved from "https://wowwiki.fandom.com/wiki/Aderic%27s_Repose?oldid=2839489"
Community content is available under CC-BY-SA unless otherwise noted.