See AddOn Studio 2015 for World of Warcraft for alternate version.

AddOn Studio 2010 for World of Warcraft is a fully featured development environment for creating and developing World of Warcraft AddOns. AddOn Studio for WoW features a professional Lua editor with full code-completion and other modern facilities, integrated with a visual WoW UI designer, SVN repository support, project based AddOn file management and deployment, and much more. 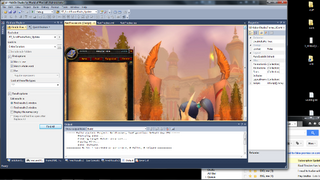 Newer versions exist, like AddOn Studio 2015 for World of Warcraft, but both this version and the 2015 version will be updated in parallel and supported together to give users a choice of which IDE's style and functionality they are more comfortable with.

Concepts of game and AddOn development, especially for WoW, are far more understood and by a much larger audience than they were at the time of the original AddOn Studio for WoW. Some of its original concepts, like pure drag-and-drop and wizard oriented development, have never historically really been useful in practice. What this product really was, and is, is a general IDE for WoW AddOn development using a free Visual Studio back-end (much like the free Express or Community versions of Visual Studio for C# and Web), with additional support for graphical frame development via a fairly extensive set of modules in the IDE. There are quite a few bells and whistles too, including attempts at supporting nearly every VS integration feature there was (which would be rare for a game production tool of any kind), all of which together threatened to make WoW Add-On development tools a real first class citizen in a world where that almost never happens.

- Support for the installer was dropped. Installers, especially for a VS shell product are non-trivial and in this case probably required more traditional packaging and release QA than they had purview for. This was one of the biggest headaches faced with 1.0 and 2.0 versions, which was a huge time sink and has a history of leaving most first time users stranded at some point. Instead a great deal of work, in this version, was put into making this a portable install style product, where you just drop the files and run it. For anyone who knows about products involving COM and Windows applications, this is non-trivial as well, but is done at start up time with more intimate knowledge of whats actually missing. And because this is based on the ISO shell there's far less to do and a much greater chance for a successful experience.

- Web Project - Support was added in this rendition of AddOn Studio for basic Web Project support for existing web sites. This translates to allowing a multi-project environment where you can potentially edit your AddOn website or satellite sites relating to your development or support in the same IDE that you are editing your AddOns, which for some should enhance productivity greatly. This includes support for the automatic Web Project mini-webhost, so you can run the changes locally before deploying. You wont be allowed to "create new sites" via the templates because the retail templates are for C# and VB projects which aren't supported, obviously. But this is really a non-issue since you can use any arbitrary existing folder, ftp, http address as an existing site. This feature also allows folders, like from the WoW ToolKits, to be added as a project on demand, and browsed inside the project explorer. And starting with AsWoW 2010, allows both modern Lua editing and viewing as well as FrameXML .xml files to be viewed arbitrariliy in a designer window letting you see what they look like right there.

This is a short list that expressly or implicitly covers major historic issues that, starting with AddOn Studio 2010 for WoW, have been handled with better support, direct fixes, and/or new and updated infrastructure.