Adarrah is one of the NPCs that can spawn by using an Amani Hex Stick on one of the wandering Forest Frog within Zul'Aman. Once spawned, she will walk to the entrance of the instance and cheer you on when you walk by.

This section concerns content exclusive to Cataclysm. In World of Warcraft: Cataclysm, Adarrah is caught in a skirmish with Tentacle beasts while sailing into Vashj'ir;she and her crew go down with the ship when it sinks. As a quest giver she can be found hovering above an giant clam in Kelp'thar Forest and then later in the submerged cave, Smuggler's Scar[56.7, 29.8]. She also appears near the entrance to Uldum in the Thistleshrub Valley[30.4, 65.6] region of Tanaris, later in the non-instanced Lost City of the Tol'vir, and then in Ramkahen. 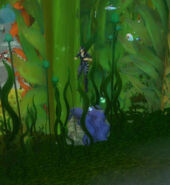 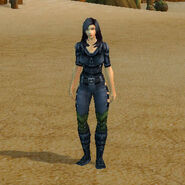 Adarrah waiting for players with the caravan in Tanaris. 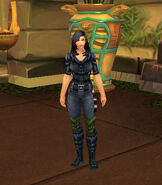 Retrieved from "https://wowwiki.fandom.com/wiki/Adarrah?oldid=2726858"
Community content is available under CC-BY-SA unless otherwise noted.