Aeonaxx is a rare dragon that spawns in Deepholm and drops the extremely desirable [Reins of the Phosphorescent Stone Drake]. 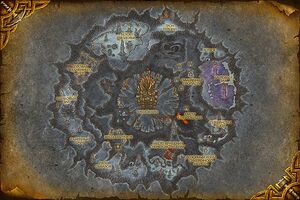 
The spawn locations are totally random. People claim SW1 and SW2 are most common only because the first person to report encountering it was at said location. Thus, people flock there, people report when finding it there. However, it is in fact random across all six and none show favor as is typical with RNG. The spawn times are a repeat of 6-22+ from what Time-Lost Proto Drake / Vyragosa was in Storm Peaks during Wrath of the Lich King. 6-22+ meaning, minimum time there can be a spawn after the previous Blood Seeker or Aeonaxx is roughly 6 hours (as sometimes there have been recordings of a few minutes short of six hours) and higher than 22 hours.

When Aeonaxx spawns it does not fly around the temple in a circle as it was reported early on. It flies in small patterns in the general area directly around where it spawned.

Phasing, from the research done so far, appears to only effect the players camping it from seeing each other. Multiple accounts of Aeonaxx spawns where people in various phases all saw it at the same exact time exist. Also, once mounted, it appears the player who mounted it becomes visable to people in all phases.

When you are the first to approach Aeonaxx your cursor will turn into the green Mount Arrow as if you were mounting a vehicle. If you are the first to mount Aeonaxx, a message will appear which says "Kill Aeonaxx before his whelps overwhelm you." From this point on, Aeonaxx will fly a route through the northern fourth of Deepholm. During the fight Young Stone Drakes will spawn which have 7,749 hitpoints. You will need to kill these immediately so you can go back to focusing on killing Aeonaxx. Aeonaxx himself does no damage. All damage from the fight comes from these easy to kill drakes.

Once you kill Aeonaxx, both you and Aeonaxx fall to the ground. You are supplied with a parachute automatically. Once landing you can loot the body for the mount. Aeonaxx can die anywhere on it's path around Deepholm, based entirely on when you are able to kill it, so if you're low on hitpoints it may be advisable to time it's death so it falls in an area that doesn't have a bunch of mobs to land in.

The popular strategy seems to be for everyone in the world who's camping this to stack all over each other in Quartzite Basin. However, stacking of any kind is highly illogical and counter productive, not to mention highly rude for the person who was there first who gets stacked on.

All six spawn locations, when mounted, exit from the inner circle at the northwest. There has never been variation found in this, so logical best case placement would put you close to NW1. Just south NW2 is a great spot as it can see NE1 and NW1. Just south of SW2 is also a great spot as it can see SW1 and SE1. However, the best spot is always the spot uncamped. If you go to an area and see 2 or more people and still park, not only is it rude but it's a further waste of other people's times and most likely your time.

Keep in mind Blood Seeker has a horribly small visual range. You pretty much have to fly directly over the spawn spots to see. Aeonaxx conversely has a massive visual range. However, not massive enough you can see it from one side of the temple all the way to the other.