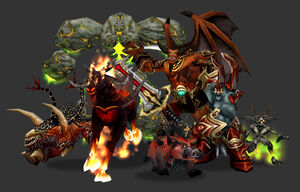 Demons are evil immortals who feed upon magic and life. They delight in inflicting suffering, spreading corruption, and, of course, destroying all that is good. Most demons were once mortal. Not all demons are intelligent: various animals have been transformed into demons, for instance.[1]

In order to become a demon, a creature must be infused with fel energy. As the existence of non-sentient demons suggests, a creature's wishes are irrelevant to the process. Willing or not, a creature can be changed into a demon. Such a transformation alters the affected creature on a fundamental level and typically leaves little or nothing of that creature's original personality.[1]

Before life even began, before even the cosmos took shape, there was Light ... and Void. In the form of a boundless prismatic sea, the Light swelled across all existence. The ocean of Light was dynamic and ever shifting. Yet as it expanded, some of its energies faded and dimmed, leaving behind pockets of cold nothingness. From the absence of Light in these spaces, a new power coalesced and came to be. This power was the Void, a dark and vampiric force driven to devour all energy, to twist creation inward to feed upon itself. The Void quickly grew and spread its influence, moving against the waves of Light. The tension between these two opposing energies eventually ignited a series of explosions, rupturing the fabric of creation and birthing a new realm into existence. In that moment, the physical universe was born. The energies released by the clash of Light and Void raged across the cosmos, matter merging and spinning into worlds without number[2]

The Rise of Twisted Souls[]

The most unstable energies coalesced into an astral dimension known as the Twisting Nether.[3] The creatures that had emerged from this realm were known as demons. They had been formed as a result of the Light and Void energies that had bled together at the borders of the Twisting Nether. The demons embraced their furious passions and reveled in pushing the boundaries of their power, heedless of the consequences. Many of these abberations indulged in the energy that pervaded the Nether. Some learned to wield the all-consuming powers of fel magic and, before long, the bloodthisty demons clawed their way into the physical universe, terrorizing mortal civilizations and bringing ruin to world after world.[4]

Demons of the Nether[]

Dreadsteed — Great demonic steeds from the dreadlord world of Xoroth. They only respond to the call of the most powerful warlocks in the land.

Infernal — Constructed fel elementals that are summoned by the warlocks' Inferno spell.

Pit Lords — Gigantic generals who lead the armies of the Legion, the pit lords are surpassed in power only by the demonic eredar.

Nathrezim (aka dreadlords) — Usually commanding a small troop of felguards, the dreadlords do not always engage in combat, and are more likely to meddle behind the scenes.

Shivarra — The fanatical shivarra are the religious commanders of the legion. They are totally devoted to Sargeras as their god, and inspire the troops — as well as being front line commanders.

Broken — Some Draenei were filled with bitterness after the massacres committed by the orcs and so the demonic influence over Outland influenced them.

Darkhound — These vile creatures are canines having somehow been twisted by demonic energy.

Felsteed — Demonic steeds that can be summoned by experienced warlocks.

Орк Скверны — Fel orcs are orcs who have been changed by the Blood of Mannoroth and of Magtheridon, changing their skin and making them a blood-thirsty race.

Fel stalker — The felbeasts were originally creatures of conquered worlds who were changed by the evil of the eredar into a demonic form.

Helboar — Helboars are boars corrupted by the resident demons in Outland.

Ман'ари (Eredar warlocks) — The uppermost rank of the Burning Legion. Some, like (Kil'jaeden and Archimonde), were turned into demons by the dark titan Sargeras.

Satyr — Satyrs are night elves who have been corrupted by demonic powers either as a reward or as punishment by Sargeras, other races may also have been transformed later.

Warp stalker - These beings were corrupted by the Burning Legion and are sometimes used as mounts.

"If I have wings, why am I always walking?" - Dreadlord in Warcraft III

"Wings, horns, hooves...what are we saying, is this Diablo?" - Illidan Stormrage in Warcraft III

Usually demons have one or more of a set of demonic physical traits.

Professions of the Cosmos[]

Shaman are spiritual guides[9] and a demon is able to use a shaman as a conduit—a natural or artificial channel through which something is conveyed—to spread battle lust and savagery.[10]

Warlocks, channelers of forbidden powers,[11] were former mages (or former shamans)[12] that delved too deeply into the roots of demonic power. Consumed by a lust for dark knowledge, they've tapped into chaotic magics from beyond the world—magics that connected the myriad worlds together.[13] The Burning Legion now feeds them their powers, allowing them to channel destructive energies and call upon the powerful emissaries of their demon masters.[14]

By their very nature, demons are leeches on the living universe—but the demonologist has mastered harnessing the power of these malefic beings on the field of battle. Warlocks harvest the souls of their defeated enemies; those specialized in the ways of demonology use this life essence to tap into the Void, pulling all manner of abomination from the chaos of the Twisting Nether. While such a practice is often considered by outsiders to be wicked and reckless, the demonologist maintains absolute control over the summoned creatures. These malignant entities are fully beholden to—and empowered by—the will of the warlock, until banished to the realm from whence they came.[15]

"Within the Twisting Nether I discovered that the spirits of the dead do linger on, floating on the astral winds between the worlds." - The warlock Gul'dan[16] 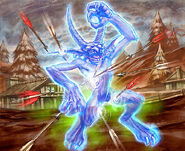 "Anything that can be killed is mortal." - The demon Magtheridon[23]

"Mortals die, but demons are forever!" - The warlock Ulrac Bloodshadow[24]

Life and death are cyclical. Undeath is forever. - Julia Graves[25]

Anastina, Herald of the Fel: "Your souls will be put to good use."

Bazul, Herald of the Fel: "Our lord gives us many gifts, but I prefer to take mine from you instead."

If demons are death-cheaters, demonologists (warlocks) are death-cheaters because they study, and practice the art of, demons. According to Justin Parker, warlocks aren't necromancers even though they have necromantic abilities. It seems that he doesn't understand that in the face of demonic power, most heroes see death. Warlocks see only opportunity. Dominance is their aim and they have found a path to it in the dark arts,[11] the arts of necromancy.[30] Perhaps a warlock is merely a necrolyte even though necrolytes are referred to as necromancers? Necrolytes are binders of souls who command the black powers that hold control over the earth.[31] A world can be defined as the earth and the titans, who awoke as living worlds,[32] were uniquely susceptible (and therefore connected) to fel magic[33]—the ways of the warlock.[34] With the strength to command the spirits of the living and the dead with fel magic, Sataiel was the so-called first necrolyte,[35] and it seems that this connection fel magic had with worlds allowed its users to control a world and the spirits of the living and the dead residing in it. As such, perhaps using the demonic fel magic—the ways of the warlock—is essentially necromancy on a large scale.

Can A Demonologist Exist Without A Demon?[]

Bildros Nullvoid: "Fools are quick to dismiss what they don't understand as evil. I see what I do as a series of calculated risks in exchange for greater power and insight. Oh, with demons."
Rinni Gloomtrik.jpg
Rinni Gloomtrik: "So far, the Scourge have not impressed me much. They are no safer from my demonic powers than a living soul is."
Uzak'zim.jpg
Uzak'zim: "Earth, fire, air, water - what hope do dey have when dey stand against da demonic fel magic?"

Warlock magics are demonic[39] powers of entropy and destruction, which is a process - not a living thing. Warlock magics do not come from the living and warlock energy spreads like radiation,[40] which means that warlock energy could seep into - and exist inside - warlocks. As warlocks are at least a - if not the - source of demonic power (or warlock magics)[41], warlocks are essentially demons themselves. Mayhap, demons only exist within the minds of warlocks and warlocks are able to release the "demonic" powers inside structures by destroying those structures then give them a constructed form, creating demonic constructs or entropic horrors, pure fel magic given form to lash out at all life — the essence they drop is poisonous[42] and would - or does - poison living beings with a sickness that drains life.

"Friends turned into foes; life into death that yet was not. There could be no hesistation, no mercy, no quarter. This was the plague. This was sorcery of a wickedness that only one such as Gul'dan could have conceived of, yet Gul'dan was long dead."[43]

The Plague of Undeath was a life-draining sickness that drained life. The mage known as Jaina claimed that demonic energy may be involved[44] and the land around the plagued granary reminded her of what happened with the Dark Portal and the Blasted Lands. When the portal was opened, the demonic energies that sapped the life from Draenor spilled through into Azeroth and the land around the portal died. Arthas then questioned if this grain carried demonic energy.[45] Eventually, it is established that those who were infused with the plague limned with a green, sickly glow and that the sick green hue is the hue of something tainted with demonic energies.[46]

The Most Notable Demons[]

In the Roleplaying Game[]

The change to a demon being includes a powerful command of arcane energy. Similar to sorcerers and wizards, demons control their power with the force of their will, but their magic is innate. The demonic magic that infuses them also confers certain immunities and resistances (acid, cold, electricity, and fire among others) and they radiate an aura that induces fear into the weak willed.[47]