Use image name and suffix.

Should not need changing. Only do so if image has unusual height/width.

If image is broader than tall (or quadratic), use middle. If image is taller than broad, use right

Northrend is the icy, northernmost continent of the world of Azeroth, and the source of the evil Scourge. It is also the home of Icecrown Glacier, the seat of the malevolent Lich King. The continent will be featured in the upcoming expansion, World of Warcraft: Wrath of the Lich King. 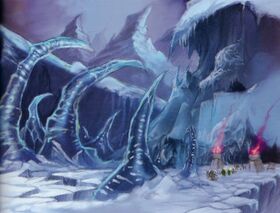 Often called "the roof of the world", Northrend is a frozen wasteland that lies far to the north. As with the other continents, it was once part of the original Kalimdor landmass that was broken apart during the War of the Ancients. The land that became Northrend drifted far from Azeroth's temperate zone, which killed off a large portion of the remaining wildlife...