Originally the slaves of jungle trolls on the Isle of Kezan, the goblin race was forced to mine kaja'mite ore out of the volcanic bowels of Mount Kajaro.

The trolls used this potent mineral for their voodoo rituals, but it had an unexpected effect on the slaves who were in constant contact with it: kaja'mite generated a startling new cunning and intelligence in the goblins. Crafting their own powerful artifacts of engineering and alchemy in secret, the goblins soon overthrew their oppressors and claimed Kezan for their homeland. The mines that had been their prison, their slave camp, and the base of their rebellion now became the city of Undermine. Weaving through the heart of the island in a dizzying network of tunnels, vaults, and lava tubes, Undermine epitomizes the goblins' complex, unpredictable mindset.

Recently, the goblins of Kezan have found a new enemy in the Alliance – unexpected and unprofitable encounters with this faction have driven certain trade princes from their comfortable neutrality. Reforging old pacts with their one-time allies, the goblins have been welcomed into the Horde with open arms.[2] 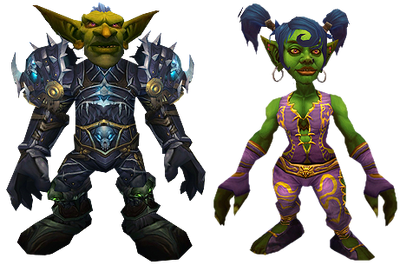 The Cataclysm expansion will introduce the goblin race to the Horde. Goblin players will be able to choose between playing a death knight, hunter, mage, priest, rogue, shaman, warlock or warrior.

You will awake upon a floating plank of a shipwreck, extremely near-death. A goblin sits next to you, not knowing you are the goblin that saved the goblins from death (the means are unknown at this time.) Another goblin shall come with goblin jumper cables and ressurect you. 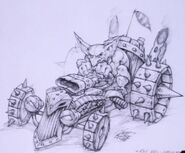 Retrieved from "https://wowwiki.fandom.com/wiki/Goblin_(playable)?oldid=2260291"
Community content is available under CC-BY-SA unless otherwise noted.