Highlord of the Silver Hand, Former Lord of Mardenholde Keep

Tirion Fordring was one of the first five Knights of the Silver Hand selected by Archbishop Alonsus Faol, and was one of the heroes of the Second War.Modèle:Cite He later became Lord of Mardenholde Keep in Hearthglen before being stripped of his title and exiled for defending an orc, Eitrigg. Following the recent death of his son Taelan Fordring, Tirion committed himself to refounding the order of the Silver Hand. He now leads the Argent Crusade, an organization consisting of the old Knights of the Silver Hand and the Argent Dawn, against the Lich King and the Scourge. To this day he remains good friends with the orc veteran Eitrigg.

As the governor of the Alliance principality of Hearthglen, Tirion lived a comfortable life, well-respected by subjects and loved by his wife Karanda and son Taelan. Both a great warrior and a just ruler, Tirion was renowned throughout the Kingdom of Lordaeron. In spite of his acclaimed military prowess, Tirion's experience as a Paladin during the orcish invasions have taught him to value peace. After the wars were over, every night Tirion prayed that no conflict would ever bring harm to his subjects again.

One day, he encountered an old orc hermit living in an abandoned tower. The two immediately battled, and they traded blows until a piece of the ruined tower collapsed on Tirion, knocking him senseless. He awoke in his bed days later, and discovered that he had been found, badly beaten, tied to his saddle, and had been healed by his ambitious second, Barthilas.

Realizing that the orc had saved him, Tirion set out and retraced his steps back to the tower. The orc, Eitrigg, told Tirion that before the coming to Azeroth, the orcs had been a noble society rooted in shamanism. After the war, he had left the corrupt Horde. Tirion, seeing great honor in Eitrigg, promised to keep his existence a secret, returning to his people and informing them that the orc had been dealt with and was not a threat.

Barthilas was not so confident, and called Saidan Dathrohan to come and settle the matter himself. Dathrohan picked up the trail and led a group of hunters into the woods, where they found Eitrigg. During the orc's capture, Tirion fought against Dathrohan's men, prompting Barthilas to gleefully note that his actions were treasonous. Tirion was brought to Stratholme to stand trial.

Despite Karandra's pleas to forget his honor and tell the jury what they wanted to hear, Tirion, hoping to be an example to his son, told the court exactly what had happened. Ultimately, the jury of Admiral Daelin Proudmoore, Arch-Mage Antonidas, Archbishop Alonsus Faol and Prince Arthas Menethil decided that since Tirion had assaulted Alliance soldiers, he could no longer be a member of the Silver Hand, and was doomed to exile. Uther the Lightbringer performed a ceremony to strip Tirion of his powers and sent him home to gather some supplies.

Desperate to prevent Eitrigg from being executed for war crimes, Tirion rode back to Stratholme, where he attacked Eitrigg's guards. Surprised, they still managed to subdue him, until a group of orcs stormed into the city. Tirion used the distraction to free Eitrigg and flee the city.

When they were in the wilds, Tirion saw that Eitrigg was near death, and did the only thing he could do, call upon the powers of the Light to heal the orc who had saved him. To his surprise, he still had the powers blessed by the Light, and Eitrigg was saved.

They abruptly found themselves surrounded by orcs, and a new Warchief, Thrall approached Eitrigg and invited him back into the Horde, which had since reverted back to its shamanistic roots once more. Eitrigg was thrilled to accept.

Tirion remained in Lordaeron, to watch his son Taelan be inducted into the Silver Hand. His son later became the lord of Mardenholde. Tirion's wife told his son that Tirion had died, and even took him to a false grave at the Undercroft, where Taelan buried the toy warhammer his father had given him in memory of his father.

See also: Of Blood and Honor

Tirion lived out his exile in a small farmstead, in the northwest of what became the Eastern Plaguelands, on the shores of the Thondroril River with his trusty horse, Mirador. During the Third War he often fought off the undead Scourge.

He was dismayed to find later that his son, Taelan, joined the Scarlet Crusade, and even became the highlord of that order. Nonetheless, he kept watching his son from afar, and even enlisted some adventurers to help him as he and a few Crusaders became trapped in the small village of Cinderhome, surrounded by Scourge forces who were interrupting the Crusade's attempt to re-settle the area.Modèle:Cite Later, Tirion turned to adventurers yet again to have them collect mementos of his son's past, which finally enabled him to convince his son to leave the Crusade, only to see him killed in the attempt. Spurred by his son's death, Tirion resolved to reform the original Silver Hand as a force of good in the world.

Cette section concerne des contenus exclusifs à World of Warcraft.
Tirion Fordring is a level 61 elite quest giver located by a cottage near the southwestern end of the Terrorweb Tunnel in the contested territory of Eastern Plaguelands. He readily accepts help from both the Horde and Alliance in his quest line, in following his assertions that race does not dictate honor, and from what he learned from his encounter with Eitrigg.

Cette section concerne des contenus exclusifs à The Burning Crusade.
In The Burning Crusade, Tirion Fordring can be found in the Old Hillsbrad Foothills via the Caverns of Time as a level 55 NPC. Tirion can be seen in the Southshore inn wearing the same plate chest he wears nowadays and discussing Ashbringer with several of his fellow members of the Silver Hand. He was the first to refer to the future weapon by its legendary name. Sadly, most of the friends assembled here would later turn to bitter enemies, as they embraced the zeal of the Crusade they would later create.

In Modèle:Questlong, the last quest of the death knight starting area, the player joins Highlord Darion Mograine leading ten thousand Scourge against three hundred defenders of the Light at the Battle for Light's Hope Chapel. After a hundred or so defenders die, Tirion appears to confront Darion. Alexandros Mograine, Darion's father, also makes an appearance.

After an interaction between Darion and Tirion, then Darion and Alexandros, the Lich King will appear and cast a spell that incapacitates Tirion. Darion, wielding the Corrupted Ashbringer once held by his father, tosses the sword to Tirion where it is seemingly purified. Tirion then charges towards Arthas, who runs and eventually escapes. It is here that Tirion makes his vow to destroy Arthas, uniting the Argent Dawn and the Knights of the Silver Hand into the Argent Crusade. Darion also pledges his Knights of the Ebon Blade to the cause.

As a paladin, Tirion Fordring was a man of honor — and his commitment to upholding his honor no matter the cost often brought him into conflict with his family and friends. His wife Karandra Fordring often lamented the sacrifices she had to make in order to adapt to her husband's tendency to place his personal honor above everything else - his family included. So, for instance, when Fordring attempted to explain to his wife and to his long-time friend Arden that his commitment to saving the life of Eitrigg was a matter of honor, he encountered, for the most part, a total lack of understanding, with both Arden and Karandra arguing that he also has a responsibility to his family and his subjects — a responsibility he should not neglect in the name of honor. Tirion's honor, therefore, was the ultimate cause of his downfall — during his trial, he was offered an opportunity to be restored to good standing within the Alliance if only he would renounce the vow he gave to Eitrigg. Tirion refused, saying that his honor precluded him from doing so.

In the end, Tirion Fordring paid heavily for the honor he held in high such esteem. Not only was he stripped of his office and estates, but his family — Karandra Fordring and Taelan — refused to accompany him into exile, stating that she would not let him ruin their lives as he had ruined his own. Thus, after his rescue of Eitrigg from the gallows in Stratholme, honor was very much the only thing Tirion still had.

Tirion's Story in His Own Words

After completing his first three quests, this conversation opens with Tirion, as part of the next quest in his chain:

I must apologize for not being entirely truthful with you in regards to my identity. I had to be certain you could be trusted — few people would have selflessly lent assistance to an old and forgotten hermit.

You have proven yourself as one of those people: A person of integrity and honor.

Thank you, Tirion. What of your identity?

My son, Taelan, was only a child when I was found guilty of treason and banished by the Alliance to live a life in exile. I chose to remain here so that I could watch over him; to somehow insure that he would grow up an honorable man.

As I had hoped, he took my place as lord of Mardenholde; but in a cruel twist of fate, joined the ranks of the Scarlet Crusade. He is now their Highlord, <race>.

Indeed. The Scarlet Crusade are an aberration of the Order of the Silver Hand.

You must believe me, <race>; Taelan is a good man. He needs to remember...remember what it is to be noble and honorable. I know that in his heart, he knows what he does is wrong. Will you help him? Will you help him remember? 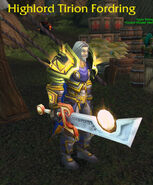