When it's time to run, four feet are better than two.TCGDP 29

Travel Form, also known as the "cheetah", is a druid shapeshifting spell. In this form, a druid is able to travel over land at higher speeds (+40%). 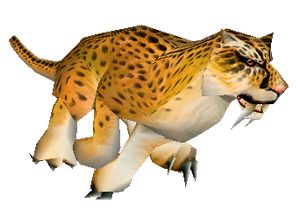 It is widely speculated that the original intention was for this form to be a stag but was changed at the last minute, explaining the odd hoof-shaped icon, and the fact that while the other forms have unique skins, cheetahs which look identical to travel form exist in the game.